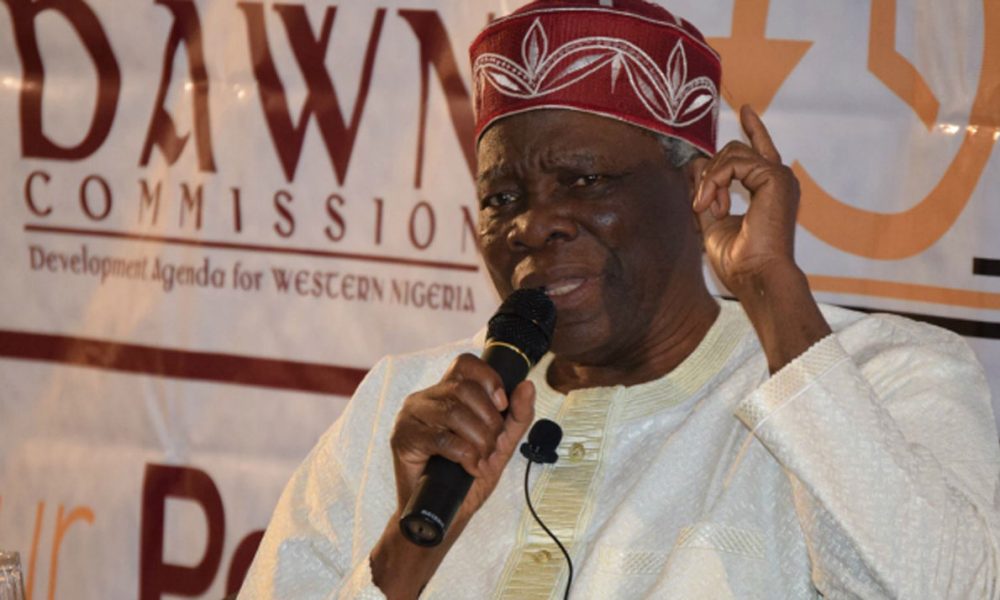 The Leader of the Umbrella body of Yoruba Self-Determination Groups, Ilana Omo Oodua (IOO), Professor Banji Akintoye, has accused the Federal Government of recruiting some political jobbers masquerading as Yoruba Nation Agitators to blackmail him.

In a statement he personally signed and made available to newsmen by the Communications Secretary of IOO, Maxwell Adeleye, Professor Akintoye stated that the reactionaries are out to sabotage the Yoruba Nation struggle into a paralysing end.

The renowned Historian said credible intelligence available before him shows that these political contractors have been paid in dollars and naira to wage war against him and some of his trusted aides.

He stated that this was done because he refused to compromise against the teeming Yoruba people.

Akintoye said a world press conference being sponsored by the Nigerian Government has been put together by these saboteurs for today November 18th, 2021 to blackmail him in order to silence him.

He, however, said, all the evil plans of these “locusts” against him and the Yoruba people shall fail, stating that “they are only destroying, and building a bad history for themselves”.

According to the Ekiti-born agitator, some of these individuals are jealous of the sudden rise of Sunday Adeyemo also known as Sunday Igboho.

The statement reads: “These reactionaries celebrated the invasion of one of my lieutenants, Sunday Adeyemo Ighoho’s House by the Nigerian Government. They never wanted the young man come out of the prison where the Nigerian Government is currently holding him in the Republic of Benin. The offence of Sunday Adeyemo is that he has become the face of the struggle, even more prominent than myself.

See also  Bishop Oyedepo Refuse CAMA, Insists No One Can Appoint A Trustee Over His Church

“They would grumble that they have been in the struggle for years, and someone who just joined the struggle is now a celebrated hero. I appealed to them to see this as a sacrifice and a battle for our children but they refused to listen.

“The last straw that broke their camel’s back was when they refused to release the organization’s fund in their possession to be used to add to the funds we wanted to use to pay Ighoho’s Lawyers in Republic of Benin.

“We were held into ransom. I had to impose some disciplinary measures in the overall interest of our people which got them angry and ever since, these reactionaries have been threatening to “scatter the struggle”.

“They have started blackmailing me and one of my trusted aides for refusing to compromise. When their faceless campaign of calumny failed to materialise, they are now coming out openly to blackmail me in order to please their pay masters in Abuja and Lagos.

“A press conference is to hold by 2pm today to blackmail me. They are being sponsored by the Fulani-controlled Nigerian Government. Njenje Media and other New Media platforms have been recruited to livestream it. They have invited some Nigerian Journalists. We now their sponsors.

“But I am sure the Yoruba People will fight these locusts. We won’t be intimidated. Soon, they will know they are tiny minority. The whole agenda is to demoralise me so that the Fulani-controlled Nigerian Government can jubilate while they smile to the bank but my mind is made up to fight to the end of my life.

“My appeal to the Yoruba people, especially, the Younger Generation, is to come out now and take over the struggle from these locusts. We must never return to the Egypt. This is mainly your battle, not mine. I am challenging the Yoruba people below the age of 50 to take their destinies into your hands. Take over NOW”.