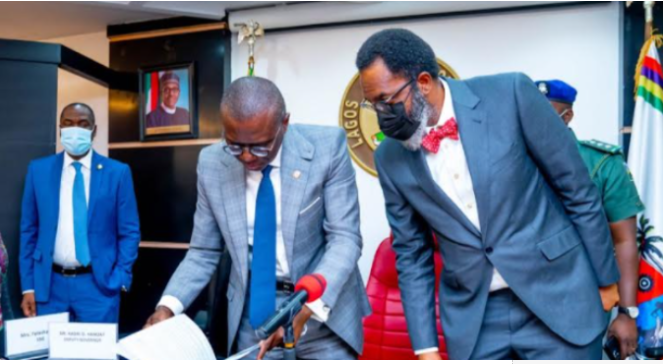 Governor Babajide Sanwo-Olu of Lagos State has been named as the person who invited Nigerian soldiers who shot and killed many EndSARS protesters at Lekki Toll gate on the 20th October, 2020.

This was contained in the report by the Lagos state Judicial Panel of Inquiry on Restitution for Victims of SARS Related Abuses and other matters submitted to him on Monday. In the report titled, ‘Report Of Lekki Incident Investigation Of 20th October 2020’, the panel said the state government through the governor invited the Nigerian Army to the state.

According to the report, eleven protesters were confirmed dead while four others were “missing presumed dead”. Forty-Eight others suffered injuries during the protest, with 20 securing gunshot injuries, while 13 others were assaulted by the military and police.

The panel also noted that 96 other corpses were presented by a Forensic Pathologist of Lagos State University Teaching Hospital, Professor John Obafunwa. Recall that the Federal Government through the Minister of Information and Culture, Lai Mohammed, had consistently denied reports of a massacre.

Lai Mohammed had described the October 20, 2020 protest against extrajudicial killings and police brutality by operatives of the now-defunct Special Anti-Robbery Squad of the Nigeria Police Force as a “massacre without bodies”. He had also threatened to sue Cable News Network (CNN) and another international media house that claimed soldiers shot at peaceful protesters.