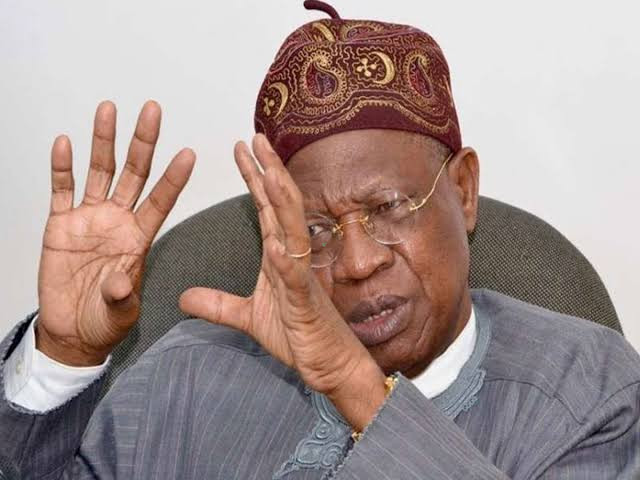 The Federal Government has slammed a US-based non-profit organization, Global Advocates for Terrorism Eradication (GATE), for alleging that the present administration under President Muhammadu Buhari is a sponsor of terrorism in the country.

In a statement issued on Sunday, the Minister of Information and Culture, Alhaji Lai Mohammed, described GATE’s allegation as a disgusting distraction orchestrated by those seeking to weaken the ongoing massive onslaught against terrorism and banditry.

Mohammed said the so-called GATE is a pesky irritant that should be ignored, especially because it is as confused as it is irresponsible.

GATE had accused the government of sponsoring terrorism.

“This organization called GATE is not even worth the ink with which its name is written. How can a serious organization accuse a government that’s tackling the twin evil of terrorism and banditry with an uncommon determination of sponsoring terrorism?

“Is it not curious that this organization has chosen this particular time, when terrorists are either surrendering in droves or running helter-skelter, as a result of a renewed offensive against them by the military, to orchestrate a distraction? What could be GATE’s motive if not to weaken the fight against terror and banditry?

“GATE and its sponsors should be thoroughly ashamed of themselves and should quit trying to distract our gallant troops who are doing everything possible, including making the supreme sacrifice, to keep our country safe,” Mohammed said.

Alhaji Mohammed said the fact that GATE, in making its absurd allegation, relied on the words of a thoroughly-discredited, fake-news peddled by former Nigerian Navy intelligence officer which has shown the hollowness of its allegation.

He said, “In the fight against terrorism, Nigeria has availed itself creditably by tackling home-grown terrorists with links to global terrorist organizations. We make bold to say that no administration in Nigeria has risen to the challenge of terrorism like the Buhari Administration has done.

“The acquisition of a myriad of platforms, the boost to the morale of our fighting forces and the leadership provided by President Buhari have combined to put our gallant troops in good stead to frontally confront and put on the run the terrorists.”