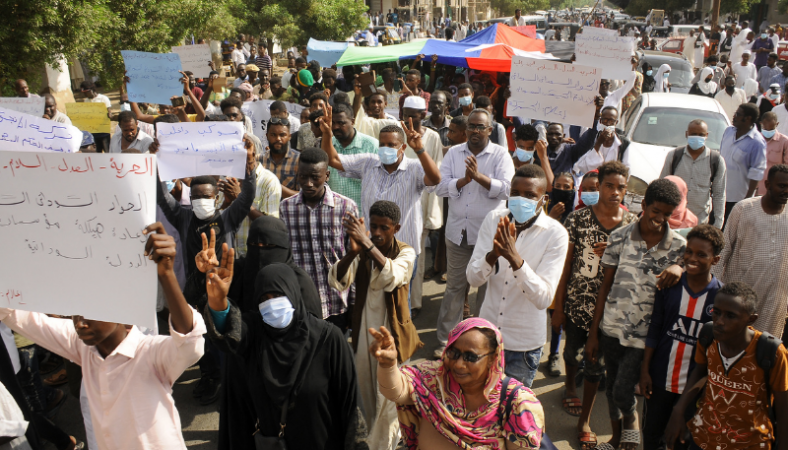 Sudanese security forces on Saturday fired tear gas at anti-coup demonstrators as hundreds rallied in and around the capital, two days after the military sought to tighten its grip by forming a new ruling council.

“Dozens gathered and began chanting against military rule and marched on to meet up with other rallies,” said Mohieddine Hassan, a witness from Al-Shajarah district in southern Khartoum.

“No, no to military rule”, “Civilian (rule) is the people’s choice”, and “Down with the entire council”, the protesters in southern Khartoum shouted.

Despite the disruption of communication networks, hundreds also gathered in the capital’s twin city of Omdurman, where police dispersed one group of protesters with tear gas, witnesses and an AFP correspondent there said.

Other demonstrations broke out in the city of Wad Madani, south of Khartoum, according to witnesses.

The military’s October 25 takeover drew widespread international condemnation, as did a deadly crackdown on street demonstrations by people demanding it restore the country’s democratic transition.

Any hopes the demonstrators had that the military would back down were dashed Thursday, when Burhan named himself as the head of a new ruling Sovereign Council that excludes the country’s main civilian bloc, triggering more condemnation from the West.

The protests occurred despite the heavy presence of military, police and paramilitary forces in Khartoum, where bridges connecting the capital to neighbouring cities were sealed off, AFP correspondents reported.

The security forces also blocked roads in Khartoum leading to the army headquarters, the site of a mass sit-in in 2019 that led to the ouster of autocratic President Omar al-Bashir.

The United Nations has called on the security forces to refrain from violence, which since the coup has already left dead at least 15 people, according to an independent union of medics.

“I once again call upon the security forces to exercise utmost restraint and respect the right to peaceful assembly and freedom of expression,” said UN Special Representative for Sudan Volker Perthes.

Saturday’s demonstrations have largely been organised by informal groups known as “resistance committees”, which emerged during the anti-Bashir demonstrations of 2019.

The committees have called for multiple protests since the coup and mobilised crowds via text messages as Sudan has largely remained under a rigorous internet outage with phone lines intermittently disrupted.

As they have before other days of protest, demonstrators again blocked roads with bricks.

“No to soldiers,” said graffiti on one shuttered shop.

But despite the efforts, “civilian opposition to the coup has been diffuse and fragmented”, Jonas Horner of the International Crisis Group said in a report last week.

The coup has led to punitive measures by the international community disturbed by the turn away from a transition to full civilian rule.

But on Friday, military figures and new civilian members of a new ruling council were sworn in before Burhan.

Three former rebel leaders who were members of the ousted Sovereign Council and were appointed to the new one did not attend the ceremony. They had previously rejected the military coup.

But it excludes any members of the Forces for Freedom and Change (FFC), an umbrella alliance that spearheaded the anti-Bashir protests, and the main bloc calling for a transition to civilian rule.

The UN has criticised the military’s latest “unilateral” step, while Western countries said it “complicates efforts to put Sudan’s democratic transition back on track”.

Burhan insists the military’s move on October 25 “was not a coup” but a push to “rectify the course of the transition” as factional infighting and splits deepened between civilians from the FFC and the military under the now-deposed government.