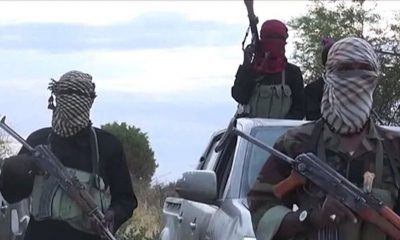 A ransom letter written by terrorist bandits has been addressed to the traditional ruler of Burkusuma in Sokoto State, demanding the payment of ₦20m as ransom for kidnapped persons.

The bandit attacked Gangara and Gatawa towns, in Sabon Birni Local Government Area of the state.

During the attack which took place on Friday, more than 20 persons were killed while 27 others were kidnapped.

However, the Sokoto State Command of the Nigeria Police in its reaction to the development, said only four persons were killed in Gangara town while no record was given for the incidence in Gatawa.

The bandits who carried out the operation are now understood to have written a letter to the traditional ruler of the area, demanding ransom payment for those kidnapped to be released.

Since the network in the area has been shut down, there’s been no means of telecommunication, hence the handwritten letter.

A resident of Getawa, who was quoted by Punch said: “One of the victims who was released, delivered the letter to the Sarkin Rakin Burkusuma.

“The letter was written in Hausa language by one of the victims kidnapped and addressed to Sarkin Rafin Burkusuma, the district head of the area.

“The bandits, in the letter delivered by one of the freed kidnap victims, informed the monarch that those abducted from Gatawa and Burkusuma are all in good condition of health.

“They demanded a ransom of ₦20m to be paid for the release of other 19 kidnap victims comprising nine males, eight females and two children, whose names were written in the letter.”

Below is the letter. As at the time of filing this report, efforts to get the reaction of the Sokoto State Police Command on the letter through its Public Relations Officer, ASP Sanusi Abubakar were not successful.