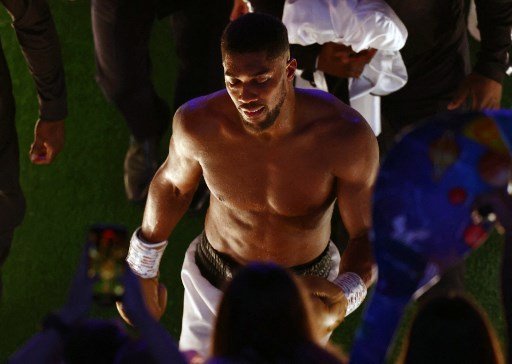 British Nigerian heavyweight boxer Anthony Joshua has given an insight into what went wrong during his fight Oleksandr Usyk on Saturday night.

Joshua’s WBA, IBF, and WBO belts were ripped away by Usyk, who produced a masterful unanimous decision victory at Tottenham Hotspur Stadium.

“My eye was shut, but it was a good experience, because in adversity, you’ve just got to learn to control yourself, stay on top of things, so when I couldn’t see anything, it’s the first time it’s happened in a fight.

“I was thinking, ‘Alright, cool, it’s the first time my eye has closed up in a fight. I can’t see nothing.’

“I’m looking out of one eye, but it got better as the rounds went on.”

However, Joshua says a fight against Tyson Fury could still happen in the future, even without his world heavyweight titles, after his loss to Oleksandr Usyk.

A rematch with Usyk is now the top priority for Joshua, rather than an undisputed world title clash against Tyson Fury, but he still believes he can fight his British rival, with or without his world .

The road to undisputed and all that stuff, it’s good,” said Joshua at the post-fight press conference.

“As I said, I’ll fight Tyson Fury, Wilder, without the belts.

“The belts are fun. It’s great, it’s legacy. But with or without the belts, I’ll fight whoever. The road to undisputed is a nice title to have and a nice title to chase.

“But would you still watch it, without the belts?

“That’s the main thing – is you’ve got two competitive fighters in the ring from UK soil, that just want to go toe-to-toe.”

But Joshua firstly intends to activate a rematch clause for an immediate second fight against Usyk.

“I’m ready to get back to training. Because of the 12 rounds, my lungs, and everything, it was a good 12-rounder, so I’ll be in a good place when I get back into training to pick up where we left off.”