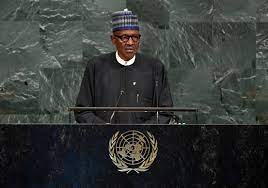 A video has emerged on the internet showing various black people going into a building in New York allegedly to collect some clothing with a female voice warning the people to desist from their actions because the Nigerian government is wicked and are perpetrators of evil acts such as kidnapping.

The person making the recording alleged that the people going into the building were being paid 50 dollars each and given some clothes to stage a protest in support of President Buhari’s government.

It will be recalled that some groups staged protests in New York against the Buhari-government during the just-concluded UN general assembly meeting while a counter-protest supporting the government also surfaced.

A video that has gone viral on social media has now alleged that the pro-government supporters were ‘bribed’ in a particular building.

The Secretary-General of the UN Antonio Guterres thanked President Muhammadu Buhari for making a tremendous effort in bringing peace and stability to West Africa. Guterres also implored the president to continue in his good deeds and also praised him for fighting terrorism in Nigeria.

winnie_ijay: Imagine a government capitalizing on the status of its citizen outside the country! If they did a good job any governing and running a country, these people wouldn’t need to get “paid” to do this! Shame on this government.

umujuagbe: If we can have homeless people in New York available to be paid for rallies, means that there’s no complete government anywhere in the world. The New York homeless people are not insulting their government, but are just moving on with life. Nigerians need so much to take away from this caption, instead of just abusing everyone.

silverand_tiles_sanitarywares: To think they are borrowing billions of dollars to achieve this evil rather than channelling same fund to restoring our nation is appalling. Reason some of them have made London their permanent base, to ensure their evil plans are properly harnessed. Taking criminality and disgusting intent to foreign lands to ensure the citizens are silenced forever. That money y’all are packing will suffocate every of your generation/benefactors. It will never be well with y’all and your entire cohorts. God!

mamabe55: Borrow money from China, take it to America and dash the citizen. $50 is like 25k, how much is minimum wage? E ni ku daada