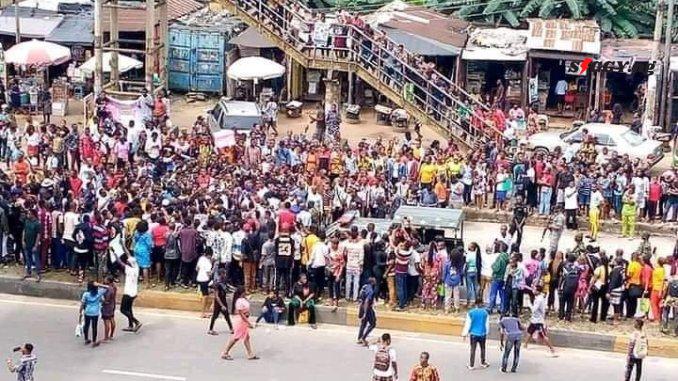 The students lamented that some personnel of the RRS team have been sexually assaulting them at their Lodge.

Academic activities were brought to a halt by protesting students of Abia State Polytechnic, Aba on Thursday.

The students it was gathered took over the Aba-Owerri road protesting the alleged rape of three female students of the institution by policemen attached to the Rapid Response Squad (RRS), in Aba.

This is even as the students also protested the non accreditation of the Civil Engineering department of the Polytechnic.

Some of the placards displayed during the protest include; “Say No to Rape”‘, “Sell this school and give us our money back”, among others.

On the alleged rape of students by RRS operatives ,the students stated that three female students residing at a Lodge near the Aba North council headquarters were raped and taken to an undisclosed hospital in the area.

The students lamented that some personnel of the RRS team have been sexually assaulting them at their Lodge.

While addressing the protesting students, Rector of the Polytechnic, Prof. Kalu Osonwa, explained that he got information that the RRS men were assaulting students.

He vowed to ensure that no student is sexually harassed and promised that the management of the Polytechnic will look into the complaints, including the non accreditation of the department of civil Engineering.

Efforts to get the reaction of the Police Public Relations Officer,Abia State Command, Geoffrey Ogbonna, was unsuccessful as at the time of filing this report.