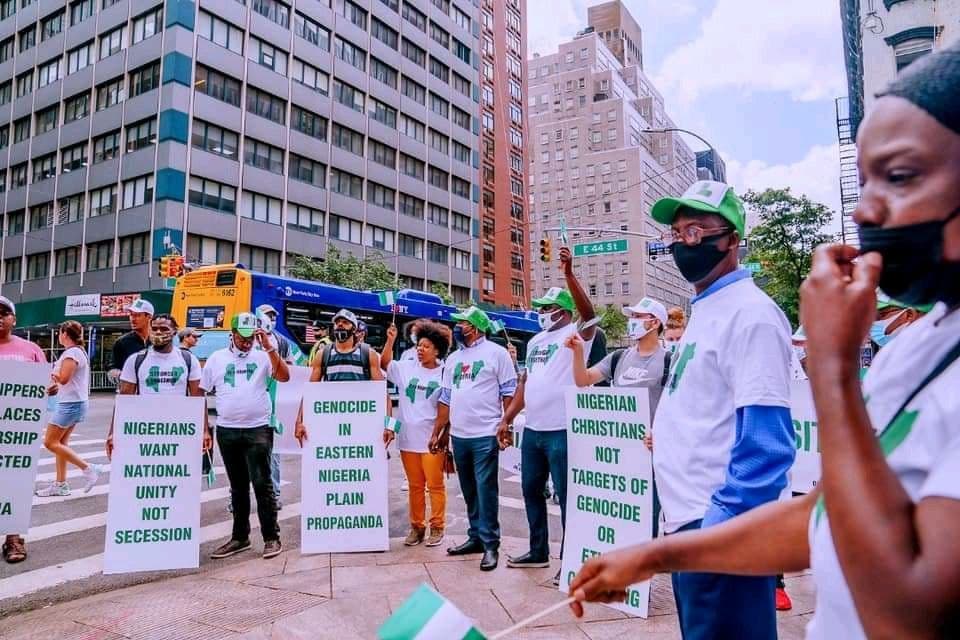 The pro-government Nigerian protesters who countered groups agitating for self-determination in New York, United States on Monday were paid $50 per hour.

The government of President Muhammadu Buhari has been exposed for hiring protesters who stormed New York on Monday.

According to Sahara Reporters, the pro-government Nigerian protesters who countered groups agitating for self-determination in New York, United States on Monday were paid $50 per hour.

One of the people involved in “the deal” told SaharaReporters that the “One Nigeria” protesters were promised $50 for one hour and $150 for three hours to be at the venue of the protest and to show support for the President Muhammadu Buhari regime despite the glaring failures.

“One of the organisers of the fake “One Nigeria” protest who bribed some Nigerians with the money is Harun Bello. He recently took a photo with controversial terrorists-linked Minister of Communications and Digital Economy, Isa Pantami,” a top source revealed to SaharaReporters.

Also, a woman confirmed that she was contacted by the organisers of the “One Nigeria” protest but she declined.

The source said the organisers requested a copy of the identity card of those who would be joining the protest which caused an uproar and made some people back out of the protest.

She said, “I was invited for the pro-Buhari protest. The organisers promised to pay $50 for one hour and we’ll be there for three hours. The person did not know we are Oduduwa adherents; we played along as if we didn’t understand him. He explained that he was given a contract to do it but yesterday, it became an issue.

“Nigerians who initially agreed later had an issue with the organisers because the organisers of the pro-Buhari protest said those who would join the protest must tender their ID cards, a copy would be made and taken to the Nigerian House but those ones refused because an ID card in America is very significant.

“With that, the organisers had to quickly go and look for any other Nigerian they saw or those who had no legal papers yet and who are in need of the $150, that they would take them to the venue. It was a staged protest. It was $50 an hour for three hours making it $150.”

The revelation comes as two Nigerian groups with conflicting ideologies confronted each other in New York over the President’s visit.

The groups had converged at the Nigerian House on 42nd Street, 2nd Avenue, airing opposing views about the issues of insecurity in Nigeria and its unity.

The protest began as President Muhammadu Buhari arrived in New York for his scheduled activities for the United Nations General Assembly.

The One Nigeria group members carried placards on which were written, “Stronger together”, “Unity in diversity”, “Genocide in Eastern Nigeria plain propaganda”, “Nigerians want national unity, not secession”, “Nigerian Christians not targets of genocide or ethnic cleansing”.

They were, however, opposed by some anti-Buhari protesters who had been organising protests for days calling for a referendum to determine the fate of the country.

The protesters who are calling for self-determination alleged that the members of the One Nigeria Group were “fake” Nigerians hired to carry the flags and take pictures.