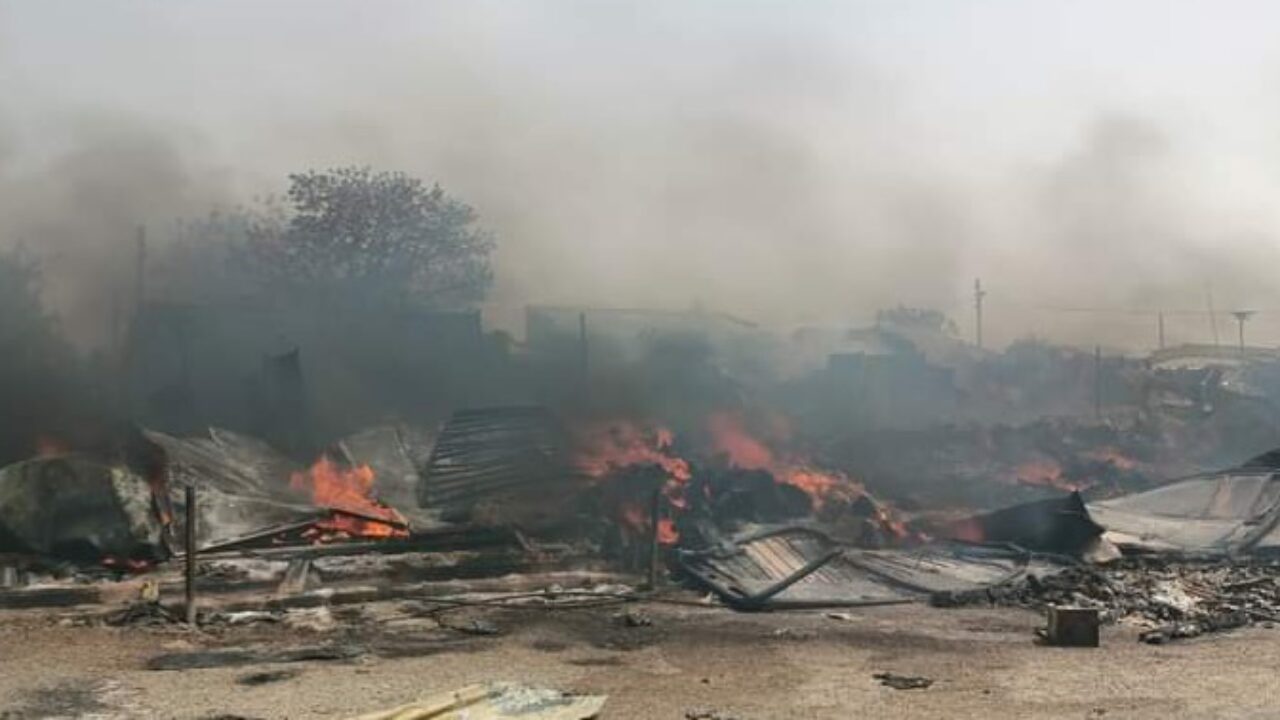 As a result, they are calling for the impeachment of their chairman.

The victims and other traders sympathetic to their cause planned to embark on a protest on Sunday to vent their anger but were advised to shelve the plans by the police and some elders in the market till further notice.

During an emergency meeting with the motive to impeach the traders’ chairman on Sunday at the association’s office, the allegations levied against the Chairman include the use of the association to further his personal interest as against that of members who elected him into office among several others.

The traders, in an interaction  on Sunday, while expressing their displeasure over the government compensation and plans to rebuild the market, accused the Chairman of the Market Traders Association in the state as well as the committee for their predicament, exonerating the state government.

The affected traders also accused Al-Baba of collecting N2,000 from each of them to issue receipts under the guise that the receipt will be requested at the point of collecting their compensation cheque from the committee but to their dismay, nothing of such was requested before they were handed the cheque.

They equally alleged that when they pleaded with Al-Baba to appeal to Governor Masari to allow them build their shops themselves, Al-Baba demanded the sum of N5,000 from each of them, claiming that the money will be given to Katsina Urban and Regional Planning Development Authority (KURPDA) to design a market plan for the affected traders which will be tabled before the Governor to allow them rebuild their shops.

To that regard, they contributed over N2.5 million However, in the course of investigation, they discovered that there was no design done anywhere and the governor was not even aware of the arrangement.

According to the traders, they summoned the emergency meeting after meeting all the necessary requirements to commence the impeachment process of the chairman of the association.

Gaji Mohammed, one of the affected victims said: “Government had good intentions to help us but the committee who came to investigate the findings shortchanged us. They spoiled everything. Why I said so is because when the fire incident occurred, we were asked to state how much we lost in the inferno. I did without bloating the amount, I said 800,000 when I could have said 3,000 000 but for the fear of God, I stated the exact lost but I was given 130,000 whereas a broom seller and one asusu seller were given N 250,000, Why someone with over 1million capital loss got just a little over a hundred thousand, Others with N5000 capital investment received 250,000 from the committee.”

See also  North vs South: Nwodo Reveals Those To Blame For Food Blockade

Similarly, Alhaji Sanni Lawal said: “Honestly, we Know that Governor Masari is an honest and kind-hearted man with passion for helping the less privileged but what this committee did made me very sad. They gave me N13,700. The debt on my neck alone is more than that. I thought when the compensation comes, I will be able to settle my debt and move on with my business because it is through this business that I feed myself and family. I don’t have any other business apart from this. I am a diabetic patient and I also suffer from high blood pressure too but for the past three months now I have not been able to buy my drugs.”

A hairstylist, who is also a victim of the inferno, accused the committee of being unfair. She said the compensation given to her could hardly buy three human hair weavon in her shop, talkless of other items she lost in the inferno, she said the N60,000 given to her is not up to 10% of her lost value.

“How much is weavon now? I can point just three weavon here right now, that is way over 60,000. Besides, I just returned from the market when the incident occurred and I lost everything inside the shop,” she said.

Recall that earlier this month, over N247 million was distributed to not fewer than 680 traders who lost goods and properties in the central market inferno that occurred in March this year.

The committee handling the compensation said the government approved the payment of 40% of the amount lost by each trader as palliative to be given to them.

However, the committee disclosed that only 68% of the 40% will be disbursed to the beneficiaries for now as the remaining 32% will be made available at a yet to be disclosed date.

Contrary to the committee’s claim, scores of the traders said what they were given was far less than 40% of their lost value and the money was not enough to take care of anything.

According to Yusuf Badamasi, one of the affected traders who sells kitchen utensils, “the money got to the hands of the victims quite right but it is not enough to take care of anything. Some lost millions and they were given N100,000, some were given N70,000, N13,000 and even some got N7,000. This money cannot in any way roof a single shop.”

Mama Yinka, a soup ingredient seller, says she might return the N50,000 she got as compensation from the committee as she cannot explain how the amount will compensate for her loss of N1.5 million.

“I was given just N50,000 even though I informed them that my total loss was N1.5 million. Please how is N50,000 now 40% of N1.5m? Maybe I will return their money because I don’t know how the amount will solve my problem or compensate for my loss.

“What pains me most is that when some people we owe heard the government had given us money, they started rushing to the market to demand for their money thinking that we now have money. The debt on our head [sic] is much. What we were given cannot upset the debt talkless of starting over,” She said.

The interaction with the traders that another key issue of concern is that of the government’s purported plan to rebuild the shops.

According to the traders, the government, after rebuilding the shops, will only hand it over to the owners if they agree to pay the sum of N1.6 million with an initial deposit of N400,000. Failure to meet the demand would lead to forfeiture of their plot they said.

Ismail Tijani, a dealer in baby wears, whose three shops were gutted in the inferno, illustrated the scenario thus: “For instance, they told us, they will rebuild your shop for you after giving you a cash assistance of N13,000 but you will have to pay N1.6 million for the shop and also before they hand you key to the shop, you must have paid the sum of 400k, how would you now invest the N13,000 to generate the N1.6 million?

“I personally lost over N9 million for my three shops but they gave me about 800k and they are asking me to pay N4.8 million before they hand over my three shops after rebuilding them. This is the trap that the market traders chairman and the committee has brought us into. This is not fair at all

This medium also reliably gathered that some of the traders who were not victims of the inferno also benefited from the sharing of the funds while some of the victims whose shops were looted were sidelined.

The traders further alleged that despite all the public outcry and challenges facing the market traders, the chairman has refused to make the exact position of the marketers known to the state government.

“Our major concern is not the money given to us, What we want the government to do for us is to give us the go ahead to rebuild our shops.

“We are appealing to the government to allow us, our family, friends and associates to assist us in rebuilding the shop according to government directives.

“If we have to go by the decision of the government a lot of us will forfeit our shops as we won’t be able to afford that considering the fact that a lot of our businesses are not yet developed considering the recent incident.

“In the past, when a part of the market got burnt, the government then rebuilt the market free for the victims and still gave them cash compensation to help them start up,” Yusuf Badamasi said.

In a telephone conversation with the Chairman of the Market Traders Association, he said he is aware of the allegations and has advised them on how to go about it.

“Yes they complained to me and I told them that anyone that’s not happy should provide their names and shop number and phone number so that we can forward the issue to the committee for review to enable them verify their claims and do a review,” Al-Baba said.

The Chairman also confirmed as true the allegations that some of the victims though with little loss incurred were given much more than what they lost to assist them.

He mentioned the case of a blind man, Ali Maikawo, that sells water fetchers (guga) though not a victim but the committee decided to offer him some assistance considering his determination to help himself instead of resorting to begging.