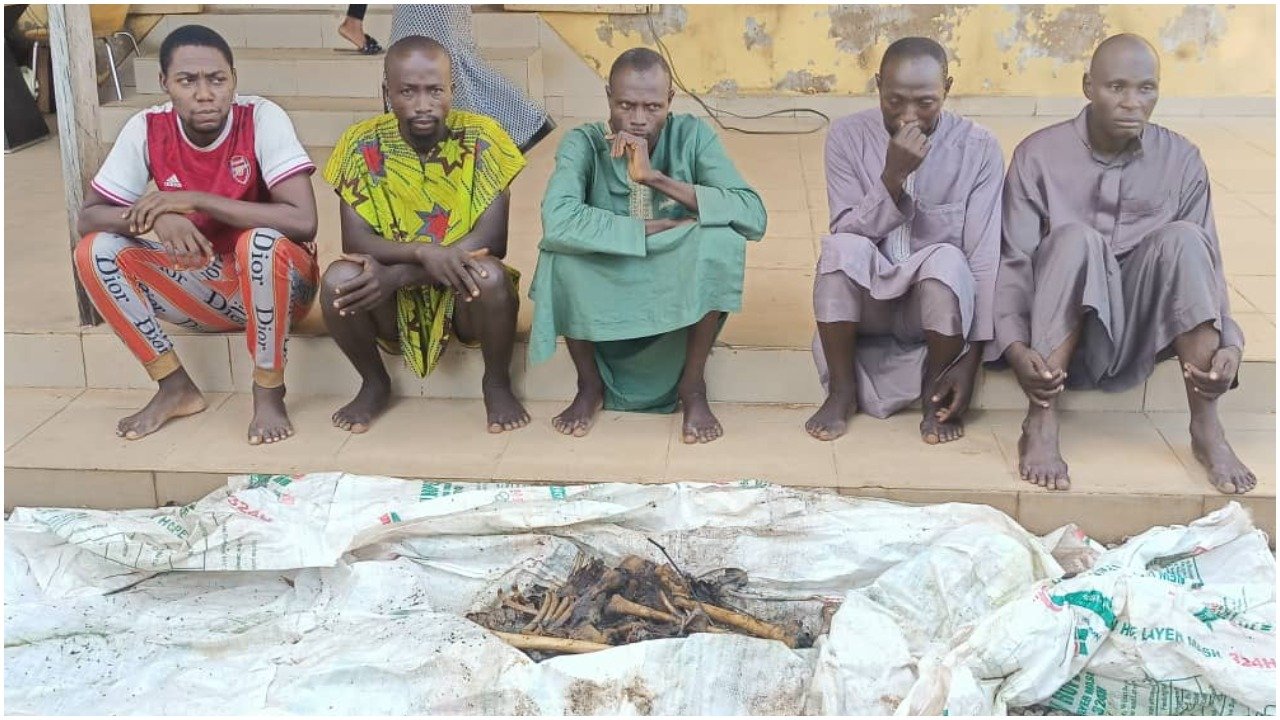 Five suspected ritualists have been arrested by the Kwara State Police Command over the alleged murder of a sex worker simply identified as Abigail for money ritual purposes.

The spokesman of the state police command, Mr Okasanmi Ajayi, revealed this in a statement in Ilorin on Friday, saying three others were still at large.

In a graphic account of the alleged act committed by the suspects, Okasanmi disclosed that ” on 29/06/2021, at about 2308 hours, an unknown person, later identified as Samuel Peter Tsado, of Patigi, Patigi Local Government Area of Kwara State, went to Victory Hotel, Patigi and requested for the service of a commercial sex worker by name Abigail, other names unknown.”

After the monetary negotiations of N5,000, both Peter Tsado and Abigail left the hotel premises to an unknown place and ever since then, both of them were not seen again.

“On the receipt of the report of a missing person, the state police commissioner, who suspected a foul directed the case be taken over by the state Criminal Investigation Department, CID, for discreet investigation,” the spokesman stated.

He said ” investigation, however, led to the arrest of one Samuel Peter Tsado, who confessed that he actually contracted the deceased for sex.

“Tsado, also confirmed that himself and one Mohammed Abgara, (m) (aka Madi), both agreed and planned how to make money ritual.

“In furtherance of their desires, they planned on how to source for a human head that would be needed for the money rituals, which prompted him to leave his house at Patigi for Victory Hotel with his motorcycle, where he approached the late Abigail, a sex worker who agreed to follow him home after agreeing on N5,000 for the night.

“The head of late Abigail was severed with a knife, the headless body of the deceased was conveyed by the suspects on Samuel Peter Tsado’s motorcycle and dumped in the bush along Patigi-Rifun Road.

Okasanmi said “both Samuel and Mohammed, went separately away only to reassemble in Bida on 30/06/2021 and while in Bida, the deceased’s head was kept with Mohammed Abubakar (aka) Malam Baba Pati’s home awaiting the arrival of the ritualist from Maiduguri in Bornu State for the money ritual exercise.”

He revealed that the investigation took detectives to Bida and Minna in Niger State, where three other suspects were arrested and confessed to the offence.

“They also confessed to have been involved in an earlier ritual attempt using a hand of one victim yet to be identified.”

According to the police spokesman, the suspects took detectives to the bush where the carcass of the deceased was recovered, while efforts to recover her severed head was still in progress as the custodian of the head was still at large.

The police assured that the fleeing suspect will be arrested, while the arrested suspects will be charged to court at the conclusion of investigations.