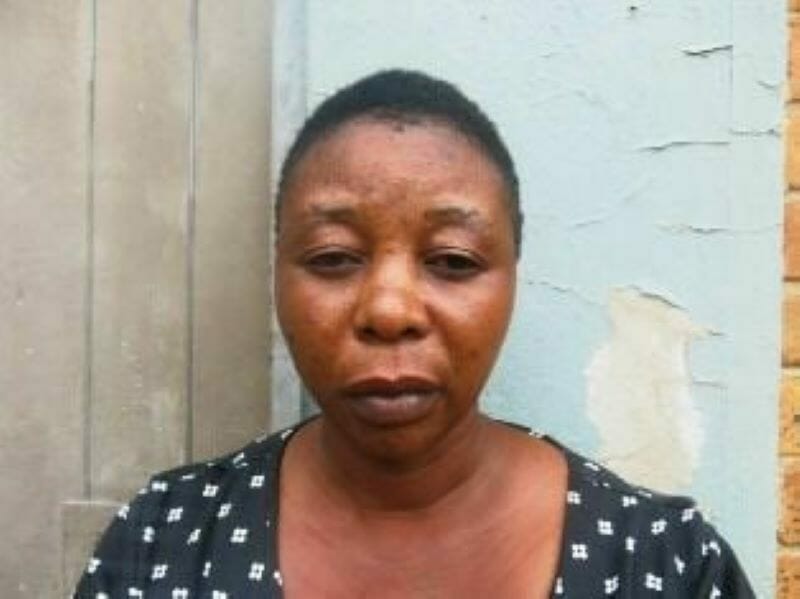 A female South African police officer, Constable Nomia Rosemary Ndlovu, allegedly insured her family members then went on a killing spree, wiping them out, some of with the help of hitmen then claimed money from insurance companies.

Among the people Constable Ndlovu allegedly ordered hits on are her elderly mother, partner, two sisters as well as her five nephews and nieces.

By the time the killing spree that started in 2012 came to an end in 2018, six people had been been brutally killed and she had allegedly received almost R1.4 million in insurance claims.

However, it is believed that what finally brought her down was ordering a hit on her sister’s children, the youngest of whom was only five months old.

The “horrified” hitman informed the police and a trap was set leading to her arrest.

Ndlovu, who worked at the Tembisa Police Station at the time of her arrest, appeared at the South Gauteng High Court on Monday. She faces six counts of murder, four counts of fraud, obstruction of justice and eights counts of conspiracy to commit murder.

According to the indictment, one of her victims was her sister Audrey whom she had insured with different companies and listing herself as the beneficiary.

On the morning of June 25, 2013, she visited Audrey, allegedly made her tea, put a “harmful substance” in it, gave it to her and left.

When she went back to Audrey’s house to check on her later that afternoon, she was still alive. She allegedly strangled her and left. Her body had already decomposed when it was later found.

Ndlovu is said to have submitted several claims to various insurance companies on the policies she initiated on her sister and was paid over R700 000.

Years later, Audrey’s son, Brilliant Mashego found out that Ndlovu had received money from insurance companies following her mother’s death. He allegedly confronted her and demanded that she pay it to him.

However, Ndlovu allegedly organised a hit on Mashego too. His body, which had massive head injuries, was found on the streets.

Not even Ndlovu’s live-in lover, Yingwani Maurice Mabasa could be spared.

In October 14 2015, Mabasa was viciously attacked, sustaining horrific head injuries. His attackers dumped his body not far from Olifantsfontein Police Station and fled, but did not take his wallet and money.

Insurance companies paid Ndlovu R416 357 and she contributed R40 000 towards the funeral of the deceased, claims the indictment.

Another alleged victim of Ndlovu’s was her cousin, Witness Madaka Homu, whom she had insured.

One day Homu left his home for work but never made it. His body, with severe head injuries, was discovered in the bushes.

According to the indictment, Ndlovu submitted several claims to various insurance companies following Homu’s death and was paid R131 000.

However, she allegedly did not contribute a cent to Homu’s family to help with funeral expenses.

Zanale Motha was a niece of Ndlovu’s who was also brutally killed, allegedly for insurance money at the behest of her aunt.

Ndlovu allegedly took out funeral insurance policies for Motha from January 2016 to May that year. The following month in June, she allegedly invited Motha to her house for two weeks.

A few days later, Motha was found lying on the side of the road. She had been so severely attacked that her head injuries rendered her unable to speak. She died a few days later.

“The insurance companies paid a total of R119 840 to the accused (Ndlovu) for funeral expenses for the deceased (Motha). The accused did not contribute to the funeral of the deceased,” says the indictment.

Mayeni Mashaba was also a relative of Ndlovu who was shot dead on the day that Ndlovu had arranged that they meet. It’s not yet known if he had also been insured by Ndlovu.

The other people that Ndlovu is accused of trying to kill are her mother, Maria Nyavana Mushwana, her sister Nomasonto Gloria Ndlovu and her five children.

Allegations are that she had taken several insurance policies in her mother’s name and gave a hitman, Lakhiwe Mkhize, R2 600 to kill her. Mkhize went inside the house and when he saw an old, vulnerable woman standing in front of him, his nerve failed him. He could not go ahead with the hit. Instead, he asked for water and left.

After Mkhize failed to kill her mother, Ndlovu allegedly contacted another man, Njabulo Vincent Kunene, and asked him to kill her sister, Nomasonto and her five children.

It is believed that this was a second attempt on Nomasonto’s life as Ndlovu’s first hit on her the previous year in 2017 had failed.

Kunene was allegedly horrified at the suggestion that he kill a woman and all her five children, one of whom was 5-month old infant.

He did not not go ahead with the hit and instead told the police who then set a trap for Ndlovu.

On the day of the planned murder, Ndlovu, Kunene, another man as well as an undercover police officer, made their way to her sister’s house in a car furnished with a recording device that recorded audio and visuals inside.

Along the way, Ndlovu allegedly bought petrol and told the “hitmen” that they must kill her sister and children by burning them inside the house.

She allegedly made it clear that the family must not be shot as that would raise suspicion. The indictment states that she said she would give them sleeping tablets and when they are asleep, the hitmen must break into the house, put socks in their mouths and set them alight.

“She handed the undercover police officer a plastic bag full of pills. The accused (Ndlovu) also told them that another plan is to strangle the intended victims and to then set them alight. She warned them not to use a knife or a gun in killing her family, as it would delay the insurance claim. Whereas a fire would not raise suspicion, as it would look like an accident,” says the indictment.

“The accused (Ndlovu) made it clear to the hitmen that she would only claim for the death of her sister. The reason why they will be killing the children is to eliminate any witnesses.”

After pointing out her sister’s house to the “hitmen” Ndlovu asked to be taken to a taxi rank where waiting police officers arrested her. Her sister and her children were not harmed.

Ndlovu has been in custody since March 2018, and her several attempts at being released on bail have failed.