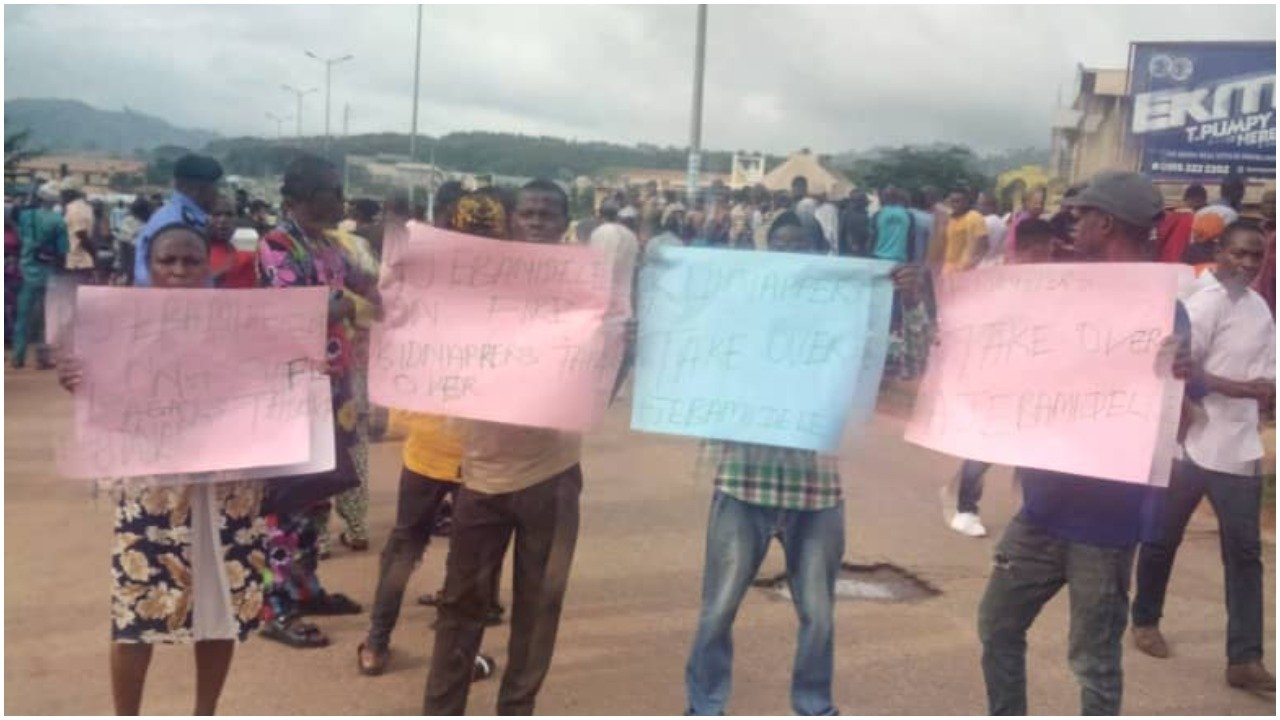 The angry residents trooped out en masse and blocked the Ado-Ikere highway during a protest that started at about 7.00 am on Wednesday, leaving hundreds of motorists stranded.

Residents of the Ajebamidele area of Ado Ekiti, the Ekiti State capital, took to the streets to protest the abduction of four residents by gunmen on Tuesday evening.

The angry residents trooped out en masse and blocked the Ado-Ikere highway during a protest that started at about 7.00am on Wednesday, leaving hundreds of motorists stranded.

The kidnapping incident, which took place in Goshen Land Community in Ajebamidele, had left residents in shock with economic and social activities paralysed.

All shops and business centres remained closed at the time of this report.

The protesters disclosed that a couple, whose names were given as Mr and Mrs Falomo and a man said to be a pastor were among the kidnapped victims.

Mrs Falomo was said to have been trailed to her residence by the kidnappers who were said to be armed with AK-47 rifles. Her husband, who came out on a rescue mission, was also abducted.

According to the residents, the kidnappers fired several gunshots into the air during the attack to prevent any rescue of the victims with some residents just arriving at the fleeing in different directions.

The other two victims were said to have been kidnapped as the gunmen were making their way out of the community. Policemen from the Ologede Police Station, along Ikere Road, arrived at the crime scene shortly after the kidnappers had left.

The protesting residents decried the level of insecurity in the land and called on both federal and state governments to urgently do something to save them from criminals.

Some of their placards read, “Save Us From Kidnappers,” “We Are No Longer Safe, Government Come To Our Rescue,” “Ajebamidele On Fire, Kidnappers Have Taken Over,” “No Movement On The Road Until Government Stops Kidnapping,” “Citizens Are No Longer Safe, What Is Happening,” “Security Is A Dividend of Democracy, Give It To Us,” “Ajebamidele Must Be Free From Kidnappers and Robbers,” among others.

There were massive rows of vehicles on both sides of the Ado-Ikere highway with police officers appealing to the protesting residents to allow a free flow of traffic which they rebuffed.

The road was reopen to traffic at about 10.05am after the police had succeeded in convincing the protesters to allow traffic to resume.

The Chairman of Goshen Landlords Association, Mr Samuel Fasua, said the protest was staged to draw the attention of government to the incident for the authorities to do something urgent to save the beleaguered residents.

Fasua said: “I was called suddenly when an okada rider who witnessed the incident raised an alarm that armed kidnappers were already in the neighborhood. That was why we called the Police to rescue us.

“According to the information we gathered, the kidnappers were many in number and they were masked. Nobody could come out to rescue the victims because of the heavy gunfire that rocked our neighbourhood during the incident.

“Guns boomed as if the place was a war zone and that was why we had to call the Police because we believed they could confront those criminals. The matter had already been reported to the police station.”

See also  Photos: Lady Reveals What She Did After She Was Invited To A Dirty House Of Benin ‘Big Boy’

Another resident, Engr. Emmanuel Ayodeji, who disclosed that his sister-in-law was among those kidnapped disclosed that the abductors have called the family to demand for a ransom of N10 million.

Ayodeji said: “My sister-in-law was among those they packed from this area about one month ago. We were told on arrival that the kidnappers came to abduct the husband and wife from their home.

“The wife arrived home with her car and they trailed her from outside and those people were armed with guns. The husband confronted them but he was overpowered and they abducted him as well.

“It was this morning that I later got to know that two more persons were kidnapped during the attack including a pastor and a woman. The kidnappers later called this morning to demand for a ransom of N10 million.”