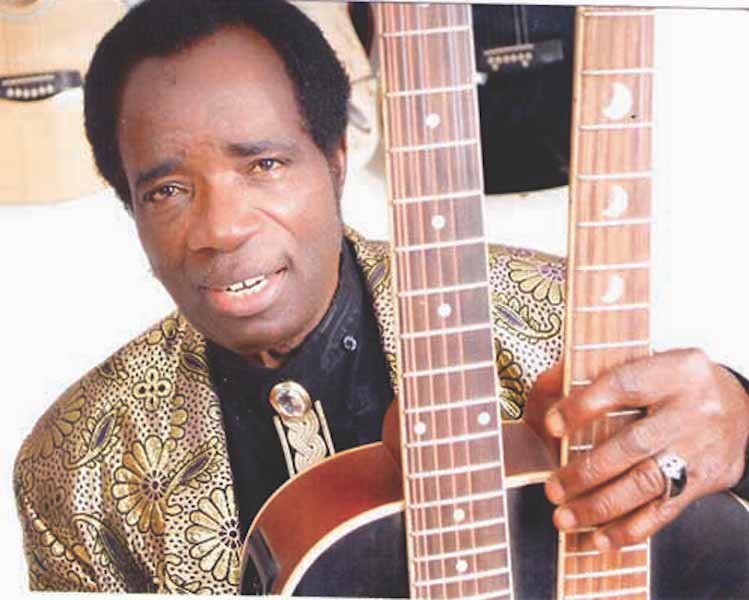 News of his death was broken last night by his nephew Uwaifo Peter ‘The Rock’ on his verified Facebook page.

“Daddy why did you leave us now. Prof Sir Victor Uwaifo has gone to rest. Black Saturday for me nooow. One week after collaborating with me,” Peter wrote.

Sir Victor’s mastery of the guitar was legendary for which he earned the appellation ‘Guitar Boy.’

He was Arts, Culture and Tourism commissioner in the administration of Governor Lucky Igbinedion in Edo State.

He was Member of the Order of the Niger (MON).

He celebrated his last birthday on March 1.

He recalled in one of the numerous newspaper interviews he granted, his encounter with a mermaid at the Bar Beach, Lagos in 1967.

His words: “Suddenly, I observed a figure coming towards me, and before I knew it the figure was right before me.”

He said he screamed – although the mermaid did not harm him.

He also recounted, in other interviews, how he was almost electrocuted on stage while playing his guitar.

The President, according to his Special Adviser on Media and Publicity, Femi Adesina: “joins the Nigerian music industry and performing artistes, home and abroad, in mourning the former first Honourable Commissioner for Arts, Culture and Tourism (Edo State), who was also the first musician and instrumentalist to be given National Honours Merit, Member of the Order of the Niger (MON) in 1983.

“President Buhari believes the renowned musician, with global appeal and recognition, lived for many firsts, which include invitation to the State House by four presidents and Heads of State, and winner of a gold disc in Africa for his song “Joromi”, released in 1965 at the age of 24.

“The President notes the glory that Sir Uwaifo brought to Nigeria through his international tours, and the active role he played in national development, returning to school to get a first degree at age 54 with first class honours, masters degree at 56, and a doctorate at 77.

See also  PHOTOS: Fire Razes Down Another Building In Yobe

“President Buhari prays for the soul of the departed musician, writer, sculptor, musical instrument inventor and university lecturer, knowing the entire country, particularly the music industry, will sorely miss him.”

Governor Godwin Obaseki of Edo State expressed shock and sadness over the news of the passing of Prof. Uwaifo, noting that his death was a loss to Edo State, Nigeria and the Black Race.

“He was talented, phenomenal and an illustrious son of Edo State who wowed the world with his array of skills, notably his music talent,” Obaseki said.

“An all-round artist, Prof. Uwaifo was an enigma, who made music for all, bringing the contemporary Benin culture to the world stage and providing vicarious experience of the peculiarities of our art and culture to a global audience.”

Paying tribute to Uwaifo’s memory, showbiz impressario, Ben Murray-Bruce said: “The legendary singer and guitarist, Sir Victor Uwaifo was a good friend. I grieve at the news of his death. My sincere condolences to his loved ones, family, and the entire music industry of which he influenced positively and greatly. May his soul rest in peace.”

Denja Abdullahi, immediate past president of the Association of Nigerian Authors (ANA) and culture technocrat, said: “Victor Uwaifo is an icon, one of the best artists to come out of Nigeria. He was an important creative person, ever agile and active. He appeared strong, vibrant. A brilliant musician, excellent visual artist, scholar and no one expected him to die so soon. However, he has left a big legacy for us in his music and other artistic creations. Indeed, his music will live forever.”

Anambra State Commissioner for Information, C. Don Adinuba, described Uwaifo as a wonderful artist and one of the best musicians of all times.

He said: “I love his music, I cherish the lyrics. In the 1960s, when he played Joromi and Akwassa, I used to dance to his music a lot. His music made me to be an excellent dancer. He was an accomplished artist in all sense of the word. Nobody expected him to die now because he was a strong person and always appeared strong. He was also a good family man that I know for sure. Moreover, his music will continue to impact on all of us forever.”

His love for music had been noticed at a young age and at just 12, he began playing guitar after being influenced by Spanish and Latin American music.

After leaving Benin for Lagos, Uwaifo continued playing music at St Gregory’s, Lagos. He was a contemporary of Segun Bucknor, and they were both among the leading Lagos high school bandleaders at the time. During school holidays and weekends, he jammed with Olaiya’s All Stars band.

After completing secondary school studies at St Gregory’s College, Uwaifo played with E.C. Arinze’s highlife during late hours. He went on to work briefly with Stephen Osadebe and Fred Coker before forming Melody Maestros in 1965.

Between 1965 and 1968, Uwaifo developed the Akwete rhythm sound and in 1969, he launched a new beat called Shadow accompanied by a new dance also called shadow, a mixture of Akwete and twist.

The sound was released when soul music was popular in Lagos and lasted a few years. After the launch of Shadow, the Melody Maestros went on tour of various Nigerian cities. Uwaifo later experimented with a new rhythm that was similar to soul but soon left it for Ekassa, an interpretation of a traditional Benin sound. In 1971, Uwaifo opened the Joromi Hotel in Benin City, and within ten years established his own television studio. From there, he produced a national weekly music and culture programme.

See also  Lagos-Ibadan Expressway To Be Shut For 121 Days

His hit song, ‘Joromi’ which became an anthem and an evergreen in Nigeria and other parts of West Africa, was released by the Melody Maestros band.

He obtained his first tertiary degree at the age of 22 years old from the Yaba College of Technology in Lagos, where he studied graphics. He went on to receive a bachelor’s degree with first-class honours at 54 years old and a master’s degree from the University of Benin in 1997 at 56 where he studied Fine and Applied Arts and majored in Sculpture.

Uwaifo, a history breaker, first made history with his song, Joromi, after which he went on to win the first Golden record in Nigeria, West Africa and Africa with the same song in 1996. The award was presented by Philips, West Africa.

Uwaifo, who until his death, was a musician, writer, sculptor, and musical instrument inventor, university lecturer, music legend, landed another first by becoming the first Honorable Commissioner for Arts, Culture and Tourism in Nigeria.

He was the winner of seven other gold discs in Guitar boy, Arabade, Ekassa series and Akwete music. He recorded under the name Victor Uwaifo and His Titibitis. He was recognized as the most educated performing music legend, musical instrument inventor, and artist worldwide with a B.A. Honors (first class valedictorian), Master degree and Ph.D in Architectural Sculpture (Thesis: A reinvention of Benin Royal Ancestral Pieces, University of Benin, Nigeria).