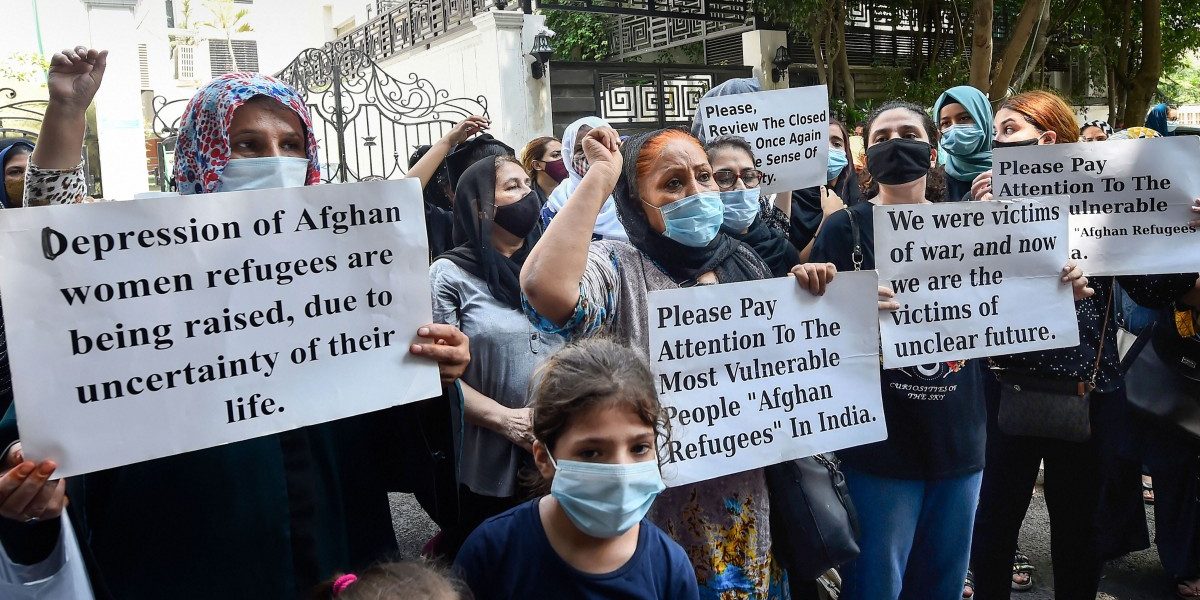 Hundreds of Afghans continued their protests in the Indian capital on Saturday, demanding refugee status and a better future for their children as prospects of returning to their home country fade following the Taliban’s return to power.

It marked the sixth day of rallies outside the UN refugee agency’s office in New Delhi.

The insurgents took control of Kabul on Aug. 15, leading many to fear their takeover would threaten the hard-won rights of the past two decades.

There are nearly 21,000 Afghan refugees in India, but only a third are registered with the UNHCR. The rest wait in limbo as asylum seekers or to be granted refugee status.

“So long as we don’t get a positive response from the UNHCR, we will continue our protest,” Ahmad Zia Ghani, head of the Afghan Solidarity Committee in New Delhi and one of the protesters, told Arab News. “The UNHCR should give all Afghans in India refugees status, and the Indian government should give us a long-term visa.”

Other demands include a reference letter for donor embassies “so that Afghans can resettle in third countries.”

Every refugee who enters India must register with the UNHCR, the central agency which facilitates resettlement in another country granting asylum.

According to the ASC, only 6,000 Afghans are recognized as refugees, while the rest have been categorized as asylum seekers by the UNHCR.

India is not a signatory to the 1951 UN Refugee Convention or the 1967 Protocol Relating to the Status of Refugees, which means it is not legally bound to look after refugees settled in its territory or to ensure their rights.

While it grants long-term visas to registered refugees, asylum seekers have to apply for a visa every six months.

It means that thousands of Afghans face the uphill task of being recognized as refugees, fighting a complicated process mired in bureaucratic inertia.

A majority, including Ghani, who fled from Afghanistan 10 years ago, sought refuge in the capital’s Bhogal locality or Lajpat Nagar, also known as “Little Kabul.”

Lajpat Nagar was built for refugees from Pakistan after partition in 1947, but today it is home to thousands of Afghans who escaped from the Taliban in the past few decades.

The Taliban were infamous for their harsh and repressive policies, particularly for women, when they ruled Afghanistan from 1996 to 2001, barring them from education and work.

Ghani said he and his family of six faced huge economic difficulties since moving to New Delhi nine years ago, surviving on low earnings from odd jobs.

While “life is tough in India,” returning to Afghanistan was not an option, especially after the Taliban’s ascent to power in recent days, he explained.

“Due to the current situation in Afghanistan, and the definitive closure of incoming financial sources that Afghan refugees depended on … we want the UNHCR and its partners to fully cover our essentials (and) living facilities henceforth until we leave India.”

Khalilullah Naderi, an Afghan student protester, moved to India from southeast Afghanistan’s Ghazni in 2015.
For the past three years, he has been studying at Delhi University under an Indian government’s scholarship program offered to 1,000 Afghan students every year.

Naderi said while that while he was “really thankful” to India for the opportunity and for providing security to his family, he did not see his future in India “as it does not give any rights to Afghans living here, and as a result, they cannot work here, they cannot have a bank account.”

“The problem with the UNHCR is that they have rejected some cases,” he told Arab News. “Where will these people go? They cannot go back to Afghanistan, and they become illegal in India if the UNHCR does not issue any card to them.”

Qurban Ali Mirzai, also known as Baba Saboor, was a renowned personality in Kabul’s theater and TV industry and escaped to India five years ago after he was “almost killed by the Taliban for my shows.”

Nowadays, he is busy shooting a short film on his mobile phone to explain the plight of Afghan refugees in India. He lamented the fact that the UNHCR “has done nothing” to resettle his family.

“I was a well-known name in Kabul, and I came to India thinking the UNHCR would help me in the resettlement of my family, (but) I see no future for my children and me,” Mirzai told Arab News. “We don’t have any rights here. My children cannot study here. They cannot marry here. I feel imprisoned in India.”

On Friday, Indian authorities said that Afghans moving to India in the past few days were being given a six-month visa.

“They are currently coming here under the six-month visa regime, and we will take it from here,” Foreign Ministry spokesperson Arindam Bagchi told reporters at a weekly press conference. “It’s an evolving situation, and making a long-term plan is not the best of ideas, considering the last few days.”

Rights groups, however, say that India cannot “abdicate its democratic and sovereign responsibility” to protect people who live under its jurisdiction.

“The failure is with the Indian government,” Suhas Chakma, director of the Rights & Risks Analysis Group, told Arab News. “Once they have come and sought refuge in India, whether the refugee status has been given by the UNHCR or some other entity does not matter. They live within the jurisdiction of the union of India. India has a greater moral responsibility now to give refugee status to those who fled Afghanistan in the past and are fleeing now. If it is not fulfilling its responsibility, then it is against its own democratic conventions and security interests.”