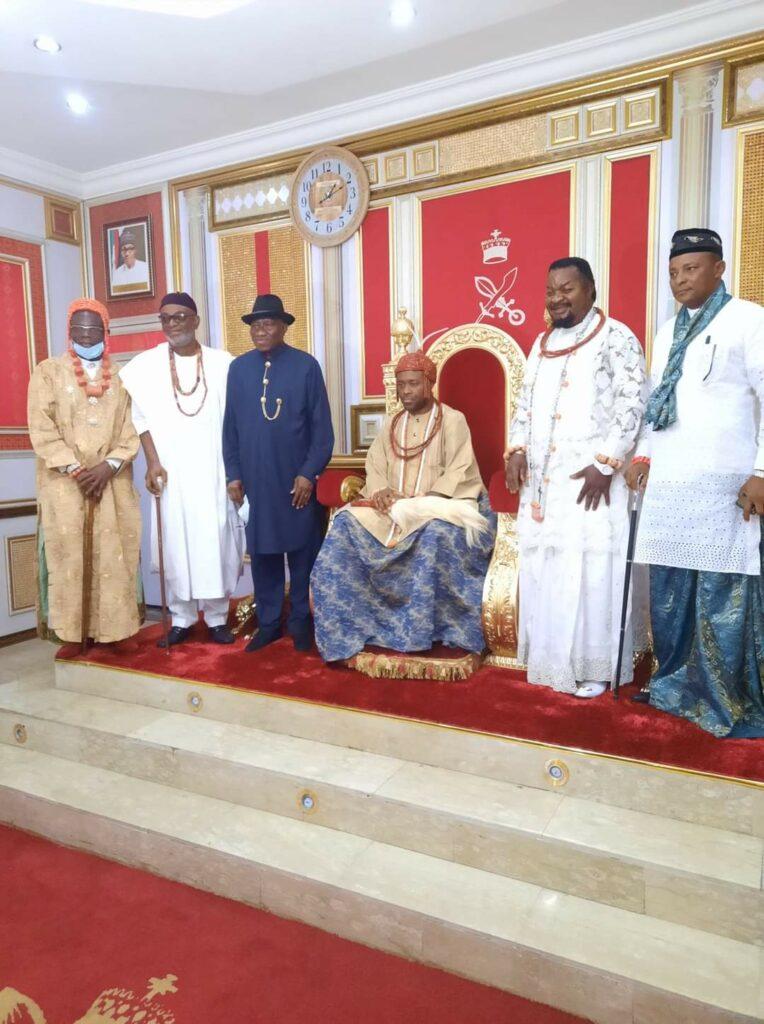 This is coming days after another ex president, Olusegun Obasanjo visited the traditional ruler.

It  had reported that Obasanjo knelt before the Monarch.

Ogiame Atuwatse III, a descendant of Olu Akengbuwa, was born on April 2, 1984, in Warri to the then Prince Godwin Toritseju Emiko, who later became the 20th Olu of Warri, Ogiame Atuwatse II, and Gladys Durorike Emiko.

He attended the NNPC Primary School in Warri for his primary education and later Adesoye College in Offa, Kwara State for his secondary education between 1995 and 2001.

From there, the monarch proceeded to Case Western Reserve University, Cleveland, Ohio in the United States where he obtained a Bachelor of Arts between 2002 and 2006, majoring in International Studies and Political Science with a minor in History and Economics.

In 2007, he earned a Master of Science Degree in Management from the same university.

The Olu is an avid sportsman, having participated in different sports including swimming, kayaks, basketball, American football, and soccer.

Following his return to Nigeria in 2008, he served in the Public Affairs Department of the National Petroleum Investment Management Services for the National Youth Service Corps (NYSC) scheme.

Thereafter he worked as an officer at the Shell Nigeria Closed Pension Fund Administrator and later at Sahara Energy as Government Relations Officer between 2010 and 2012.

As an entrepreneur, he founded Noble Nigeria Limited and Coral Curator limited.

He is also the Chairman of Ocean Marine Security Limited, as well as a Director in Gulf of Guinea limited, Vessel Link Big Limited, among others.

The monarch is married to Ivie Uhunoma Emiko, daughter of Edo business mogul, Idahosa Okunbo, and they are blessed with three children.