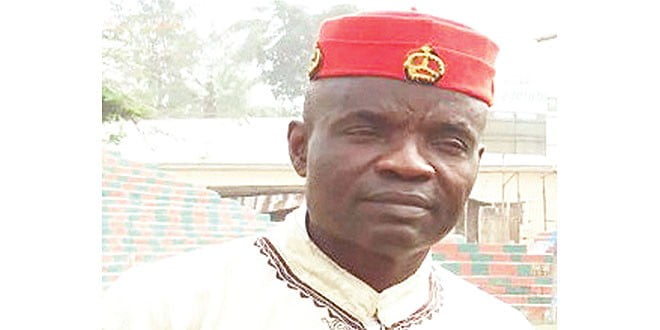 Self-styled Spiritual Leader of Igboland, Chief Rommy Ezeonwuka has declared that the ghosts of dead bodies deposited at various mortuaries in Anambra State would disrupt the scheduled November 6 governorship election, if the corpses were not buried before polls opened.

Ezeonwuka, who is a member of the All Progressives Grand Alliance (APGA) Board of Trustees, disclosed that this had been revealed to him owing to the popular Igbo practice of depositing dead bodies in mortuaries.

Lamenting that the souls of the dead ones were been incarcerated and dumped in morgues, he insisted that this practice is responsible for the myriad of challenges facing Ndigbo, including violent crimes, youth unemployment, bad roads, poverty, dirty environment, diseases, hunger and fear, among other things.

He also linked ghosts to the Monday sit-in in the entire Igboland last Monday as people remained at home even after the Indigenous People of Biafra (IPOB) had suspended the every Monday sit-at-home order earlier given, in protest against the continued incarceration of Nnamdi Kanu.

The spiritual leader warned that the souls of the dead bodies languishing in mortuaries across Igboland were fueling sit-at-home and inducing fear of the unknown among Ndigbo, who he said had become afraid to go about their normal businesses even when nobody was pursuing them.

The APGA chieftain, according to Daily Sun, insisted that there would be no election on November 6, until the dead bodies in mortuaries were buried, “otherwise ghosts would disrupt the election”.

He blamed Christians for all the problems facing Ndigbo as, according to him, the problems stemmed from depositing corpses in the mortuary, insisting that the Christian practice of preserving dead bodies in ‘cold rooms’ preparatory to burial, “contrary to the provisions of the Bible, had become very rampant in Igboland, to the detriment of Ndigbo’s spiritual well-being”.

Ezeonwuka noted that the more common the “unwholesome” practice, the more fears and dangers it would continue to cause in Igboland.

“In Deuteronomy chapter 21 verse 23, God told the Israelites that they should not keep any dead body overnight. Again in Matthew chapter 8 verse 22, Jesus told his disciples to leave the dead to bury themselves. So, where did Christians learn that dead bodies should be kept in the mortuary for burial ceremonies? Let me as the spiritual leader warn that Ndigbo is in danger of facing more lockdowns and other problems, if we do not remove all the corpses in all the mortuaries in Igboland and then stop burial with the ceremony.

“As birth comes so should death. Day of child ceremonial dedication comes later after birth. So also should burial of the dead take effect immediately after demise while the funeral ceremony comes later,” he said.

He lamented that many things in Igboland were already ‘facing death’ row as a result of the dead bodies in mortuaries.

“Onitsha-Enugu Expressway is dead at Amansea; Onitsha-Owerri Road is dead; Enugu-Port Harcourt Road is dead; inside roads in Onitsha and Aba are completely dead; some people’s brains are dead; brains of some Keke drivers in Onitsha are dead while some eat dead food like akpu. All these are consequent upon dead bodies in morgues in the South East. We have over three million dead bodies in mortuaries across Igboland.

“The souls of the dead bodies have to be committed to 6 feet below immediately to separate their souls from the living so that the living would be free and later on the funeral ceremony takes place. That’s how God wants it to be, but Christians are doing the contrary thing for the reason best known to them. But, they have to stop it otherwise their churches will also face danger. Look at what is happening in Afghanistan where they butcher Christians like animals,” he lamented.