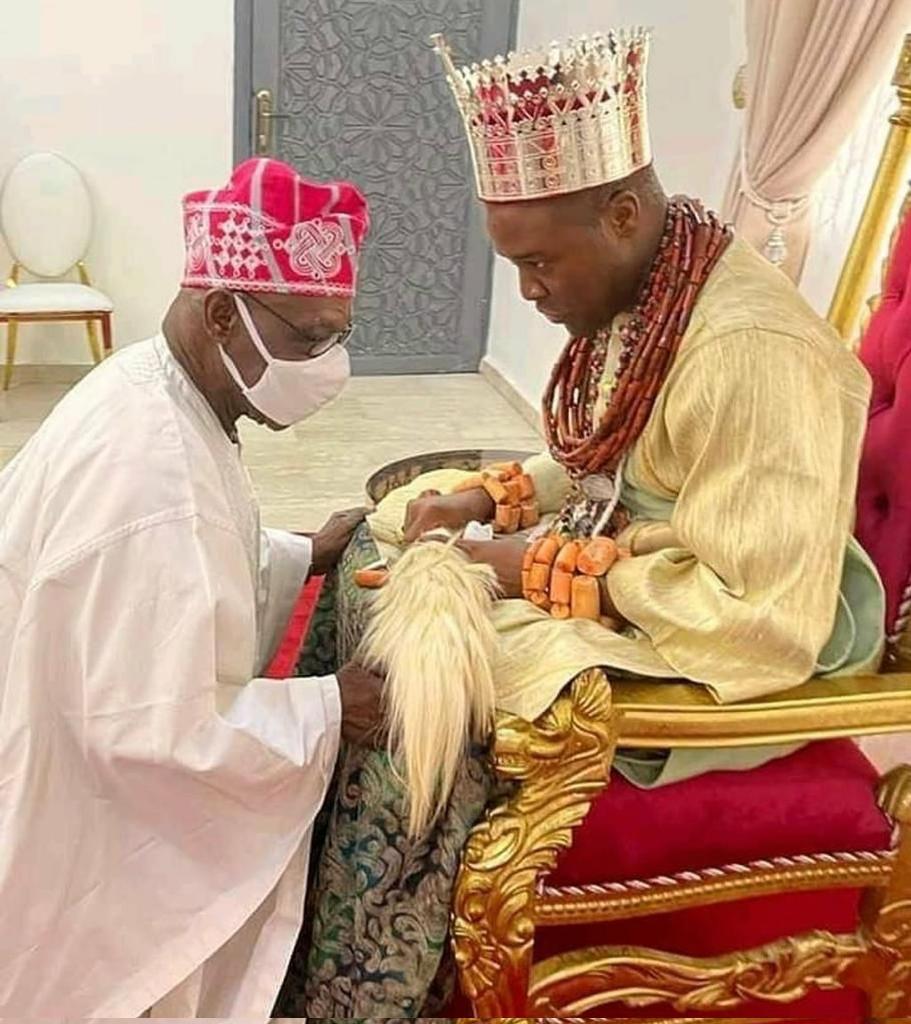 Former President of Nigeria, Olusegun Obasanjo on Sunday put age aside and highlighted respect for tradition and culture as he was pictured kneeling before the new Olu of Warri, Ogiame Atuwatse III.

The former President was seen paying homage to the newly crowned 37-year-old king in what many observers have described as a great lesson in tradition.

Omoba Tshola Emiko was on Saturday crowned as the 21st Olu of Warri Kingdom and the Ogiame Atuwatse III of the Warri Kingdom.

Speaking on Sunday during the thanksgiving service for the Olu held at his Palace, Obasanjo charged the new king to always remember that God gave him the seat and position to serve his people.

During his speech, however, Obasanjo noted that in his lifetime, he has been blessed to witness the installation of three monarchs in the Itsekiri kingdom and doesn’t wish to see the coronation of the fouth.

Speaking further, the elder statesman charged the new monarch to be alive to his responsibilities, respect the people who chose him to be their leader and rely on God for wisdom.

“I am one of the happiest on your installation because God has especially favoured me to see three Olus and I don’t pray to see the fourth one.”

“I want to emphasize that the position you occupy today is given to you by God but with your own people surrounding you and you must always remember that.”

“If God has given you a role to perform you will be offending God if you fail to perform that task.”

“Be very close to God in whatever situation you may find yourself and God will surely make a way for you,”, he said.

The Delta State Governor, Ifeanyi Okowa who was also present at the event, charged the new monarch to follow the path of peace and seek the development of his domain and people.

He wished the Olu a peaceful and prosperous reign.

“I congratulate you because I know that you are a man of peace and I know that the Lord God has chosen you to ascend the throne at this time.”

“It is a time for healing and a time for your Majesty to ensure that the kingdom comes together.”

“I know that some people can be very stubborn but I urge you to extend the olive branch to them and I know that it will be well with the Itsekiri people.”

“You have a lot of work to do not just in Itsekiri nation but in the entire nation.”

“On behalf of the government and people of Delta, we congratulate you and the Itsekiri people on your successful coronation.”

“We know that your reign will truly bring peace and development and I believe the Lord God has prepared you for a time like this and may the presence of God be with you on this throne,” he said.

A former National President, Christian Association of Nigeria, CAN, Pastor Ayo Oritsejafor, the Speaker of the Delta State House of Assembly, Hon Rt Hon Sheriff Oborevwori, Chairman, Warri South local government, Dr. Mike Tidi, and many others including sons and daughters of the kingdom.