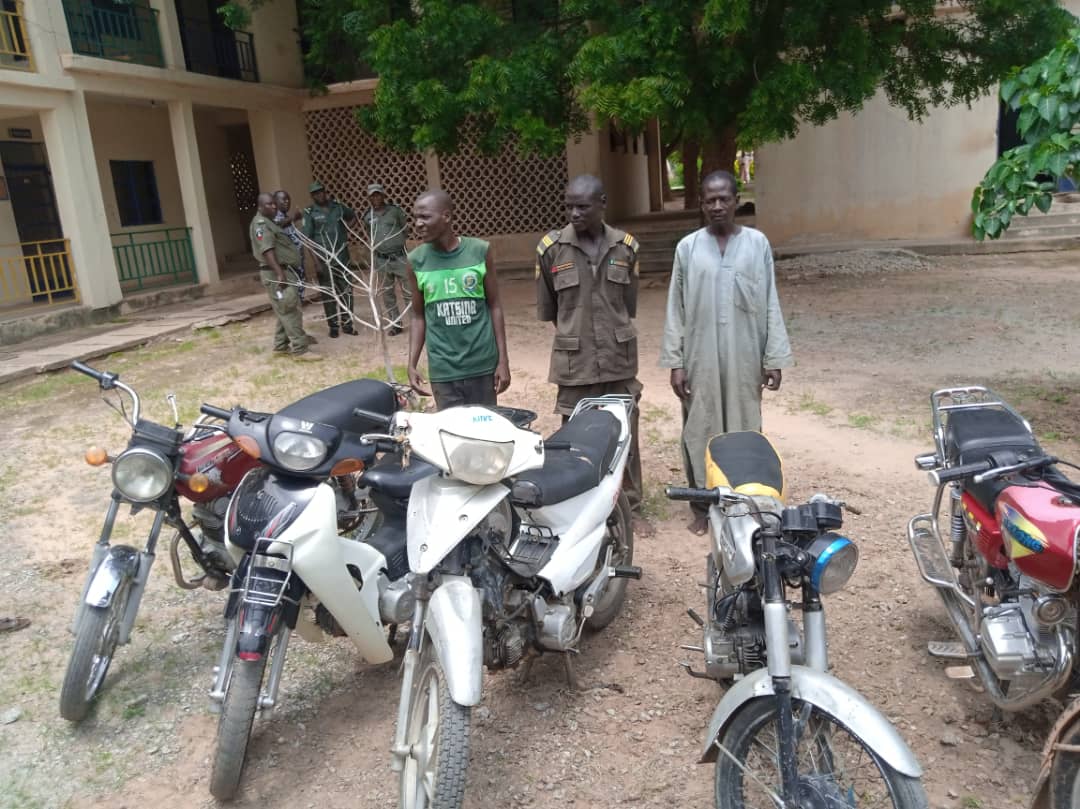 An ex-convict once arrested and convicted for impersonation and motorcycle theft has gone back to his old ways after returning from prison.

The ex-convict this time around was caught adorning the Nigeria Correctional Services uniform unlike the previous time where he was caught in police uniform.

The Katsina Police Public Relations Officer, SP Isah Gambo paraded the ex-convict alongside other suspected criminals before newsmen on Friday at the state police headquarters.

The ex-convict, Shamsu Sani, 32, of Yammawa Quarters, Katsina, is alleged to be a notorious criminal who specializes in house breaking and theft of motorcycles. Daily Prayers

Luck ran out of the impostor, while he was busy posing as an officer of the Nigeria Correctional Services, cruising on a suspected stolen Day-Long motorcycle, adorning their uniform.

In the course of interrogation, two persons whom he sold the motorcycles to were arrested in due course and they have also revealed vital information to the police during investigation.

“The Command has succeeded in arresting one Shamsu Sani 32, of Yammawa Quarters, Katsina, an ex-convict, a notorious thief, who specializes in house breaking and theft of motorcycles. Nemesis caught up with the suspect when he was arrested wearing Nigerian Correctional Service Uniform and impersonating the agency, with a suspected stolen motorcycle, Day-Long, Red in colour, with Reg. No. KTN 266 UX at Kankia LGA belonging to one Lawal Musa, of Bakin Kasuwa Quarter, Katsina.

“In the course of investigation, two suspected receivers were also arrested and five (5) motorcycles reasonably suspected to be stolen were recovered in their possession. Investigation is ongoing,” SP Gambo revealed.

In a related development, based on a tip off, the Katsina Police Command busted a syndicate of motorcycle bandits and recovered five stolen motorcycles.

The suspects whom were also paraded at the police headquarters by the spokesman of the Katsina Police Command includes: Abdulmalik Haruna of Sabon Titi Kwado; Habibu Kabir, of Sabuwar Unguwa, Lawal Magaji aka ‘KC’ of Filin Polo and Hassan Usman of Layin Kamfala, Fagge LGA, Kano, along Jibia road.

Two motorcycles (Cargo and Boxer) suspected to have been stolen were in their possession as at the time they were busted.

In the course of investigation, the suspects confessed to have stolen the motorcycles from Alaba Quarters in Katsina.