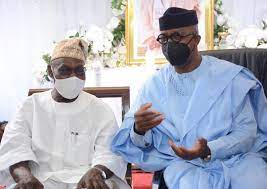 The Governor of Ogun State, Dapo Abiodun, has adopted former President, Olusegun Obasanjo as his father, weeks after the death of his biological father.

Abiodun stated this on Sunday when the former President paid him a condolence visit in his Iperu country home, over the death of his father.

Recall that the Governor’s father, Pa Emmanuel, died on August 2.

Obasanjo during his visit on Sunday charged people to learn from the death of the Governor’s father, adding that everyone would answer the call one day, no matter how long.

Governor Abiodun while speaking described the former president as an asset that should be exploited to the fullest.

He added that Obasanjo as to act as his father not that his biological father is dead.

He said, “Baba, you are going no where. By the grace of God, you will live longer. We can not afford your going now. You have been my ‘father’ over the years, but now that my biological father has gone to meet with the Saints, you have to step up now to be my father,” Abiodun said.