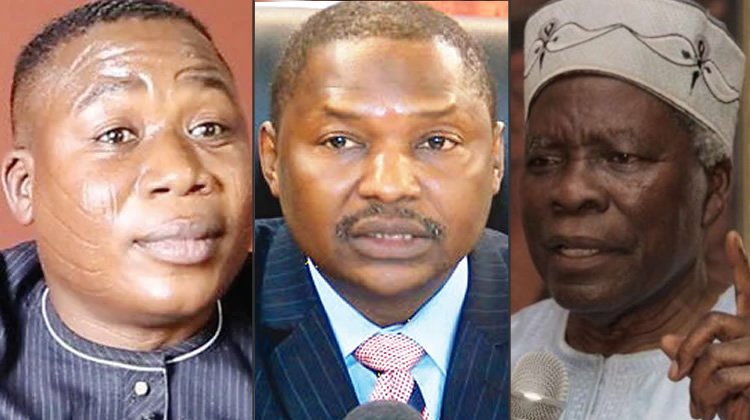 Umar Gwandu, Special Assistant on Media and Public Relations to the Attorney General of the Federation and Minister of Justice, Abubakar Malami (SAN), disclosed that the Federal Government would explore all options within the context of the law to ensure a peaceful and united Nigeria.

Malami’s aide stated this during an interview with PUNCH on Saturday.

Asked whether the AGF Office had abandoned the extradition of Igboho or otherwise, Malami’s aide said he could not make the “processes” known to the public.

Gwandu said, “There are certain things that may not require publicity but the important thing is having a peaceful Nigeria and not discussing all or making public some of the processes so far.”

The AGF Office is responsible for matters regarding extradition, repatriation and transfer of suspects or wanted persons.

Recall that in September 2017, Malami and the then Solicitor General of the Federation and Permanent Secretary of the Federal Ministry of Justice, Mr Dayo Apata, had approached the Federal High Court in Abuja to give judicial backing to the Executive Order of President Muhammadu Buhari, outlawing Indigenous People of Biafra, IPOB, and its activities in every part of Nigeria.

The then Acting Chief Judge of the Federal High Court, Justice Abdu Kafarati, had granted the order proscribing the group.

The AGF Office said options were on the table to deal with Yoruba Nation groups to ensure a united and peaceful Nigeria.

According to PUNCH, when asked specifically whether the Federal Government intended to proscribe Akintoye and Igboho-led Yoruba Nation group, the AGF Office said, “Whatever thing that is doable and possible within the context of the law in accordance with extant provisions of the law will be pursued. All options are available at the Federal Government’s end.”

The AGF Office said it was not true that Buhari’s government had not been prosecuting terrorists and bandits.

“That is a lie. There is a department under the Attorney General that is pursuing all the issues. It doesn’t hold water; it is just a mere figment of the imagination of mischief-makers,” Malami’s aide said.