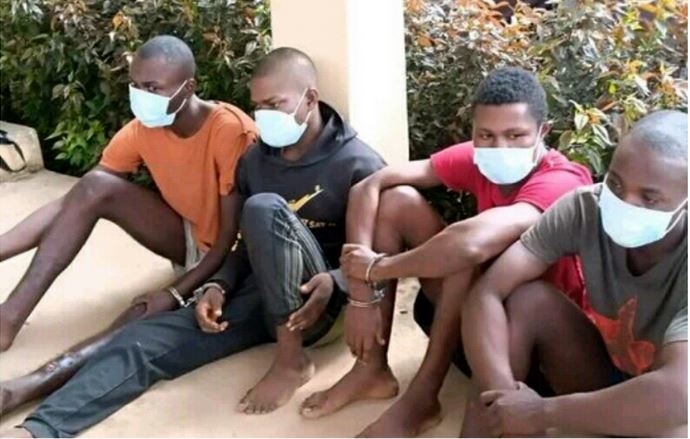 Ms. Ibrahim was murdered in August 2019 at her Point-Of-Sale shop located in the Oke Ogba area of Akure South.

Four members of an armed robbery gang that robbed and killed six persons including two PoS operators and two Filling Station attendants in Akure, the Ondo state capital, have been paraded by the Ondo State Police Commmand.

The leader of the gang, Banjo Adu, 24, in an interview with newsmen on Thursday, said he killed the female PoS operator, Miss Adetutu Nofisat Ibrahim because the 28-year-old staff of First Bank refused to hand over her money on time.

Ms. Ibrahim was murdered in August 2019 at her Point-Of-Sale shop located in the Oke Ogba area of Akure South.

“When my gang members and I got to the PoS shop of late Miss Adetutu, she refused to give us money on time and I put the trigger on her and I killed her after which we made away with her money,” he said. The suspects had also in January 2020 stormed Owe-Akala area of Oke-Aro, Akure and also robbed a POS shop belonging to one Solomon Ehingbe.

Solomon was shot dead while the hoodlums later raided a restaurant located around NEPA area of Akure from where they carted away the sum of N1,200,000 cash, being proceeds from the sales of the day and also carted away handsets of customers who were at the scene.

Adu also confessed to killing Ehingbe because he delayed in bringing out the cash when they arrived at his shop.

“We went round to other places like Obioma restaurant and robbed her of N150,000. We also proceeded to Rano Filling Station and robbed them of their money. We were arrested through a CCTV Camera that was placed in one of the places we robbed. We never knew there was camera installed. As we left the place, we got to a PoS operator who did not give us money on time.” he added.

CP Salami said the suspects have made confessional statements and would soon be charged to court.