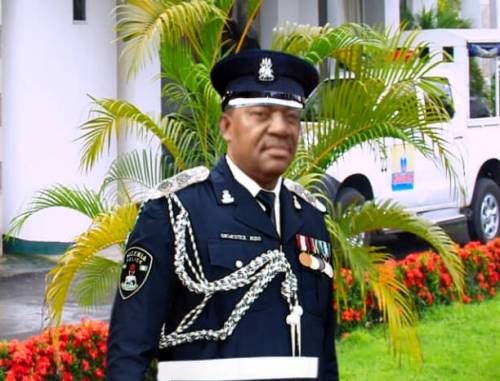 The Police Command in Imo State has released the picture of a Chief Superintendent of Police, Fatman Dooiyor, who was killed during an attack by unknown gunmen on Omuma Divisional Headquarters, in the state in July 26.

The State Governor, Hope Uzodinma is from Omuma in the Oru East Local Government Area of the state.

The spokesman of the state police command, Mike Abattam, in a statement, said the command is proud of Dooiyor, describing him as a patriot, professional and dedicated officer.

While parading the suspects alleged to be responsible for the recent attacks on the Omuma and Njaba divisional police headquarters, Abattam said guns, magazines and other weapons were recovered from the hideout of the suspects when it was raided by the personnel of the command.

He said, “Sequel to the recent attack on the Omuma and Njaba police stations, where the bandits were swiftly repelled by the tactical teams of the Imo State Police Command, and the unfortunate loss of a divisional police officer, one of the bandits, Emmanuel Nnaji, 15, a native of Awala in the Ideato South LGA of Imo State, was arrested with bullet wounds and brought to the station.

“On interrogation by the command’s tactical teams, the suspect gave a vivid description of a hotel located in Orlu as the place where the bandits stayed and planned before they executed their dastardly act on the police stations. He further stated that the owner of the hotel had been accommodating and assisting them financially.

“He then volunteered and led security forces to the location of the hotel. On arrival, the hotel and house were cordoned off and searched; the following exhibits were recovered from the 26 arrested suspects, including seven females: one AK-47 rifle with two magazines loaded with 55 rounds of live ammunition, five pump action guns, two double-barrelled cut-to-size guns, four double-barrelled locally-made pistols, three single-barrelled locally-made pistols, eight live cartridges, charms, two bags of weed suspected to be Indian hemp, Biafran flag and beret, ESN cap, four pairs of army camouflage uniforms, a camouflage bag, and a signboard with the Biafra insignia.

“It is on good record that it was in the same hotel that the head of a young man was severed and placed on the road close to the hotel premises. Presently, the investigation is ongoing and the suspects are undergoing interrogation.”