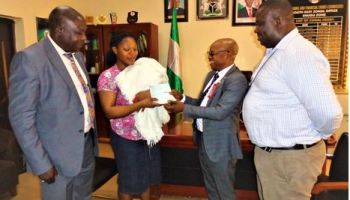 Operatives of the Economic and Financial Crimes Commission (EFCC) in Ebonyi have helped a woman recover the sum of ₦191,000 stolen from her.

Reports had it that the lucky woman, Lillian Anibogu, was robbed of her mobile phone and Automated Teller Machine cards at gunpoint inside a bus in the state.

The assailants after carrying out the criminal act proceeded to a Point of Sale terminal to use the cards. They, however, met their waterloo as the POS operator who became suspicious of their conduct, reportedly alerted the police in Ishieke, Abakaliki.

The police acted swiftly and the suspects were subsequently arrested and handed over to the anti-graft agency.

The suspects, Victor Adogu, Onuoha Emeka and Amadi Anthony, were arraigned before Justice F. O. G. Ogunbanjo of the Federal High Court, Enugu, on five counts bordering on stealing and manipulation of a PoS terminal with intent to defraud one Lillian Anibogu to the tune of about N191,000.

The statement read in part, “The Enugu Zonal Commander, Oshodi Johnson, while presenting the cheques, reiterated the fact that the EFCC exists for the good of the people. The EFCC is for everybody and we will do all it takes to ensure that victims of fraud do not cry forever as far as it lies within the commission’s mandate. He warned all those, who engage in various forms of fraud, to desist as they will certainly face the full wrath of the law.

“After receiving the cheques, Anibogu expressed gratitude to the commission for helping her to recover the money.”