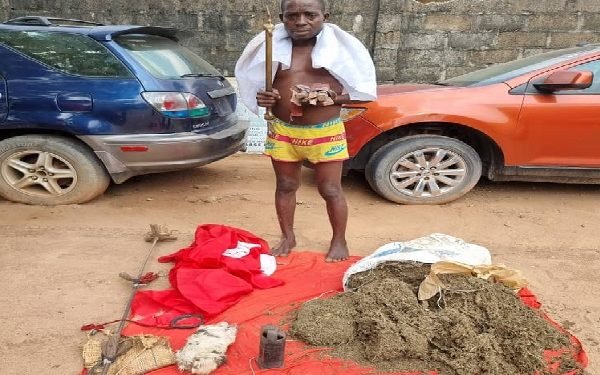 A 49-year-old man identified by the Police as the native doctor who prepares charms for members of the Indigenous People of Biafra (IPOB) and Eastern Security Network (ESN) in Imo State has been arrested.

The native doctor, whose name was given as Benneth Okoli was paraded on Thursday by the Imo Police Command at the Command Headquarters, Owerri.

While parading the suspect, the State Commissioner of Police, Abutu Yaro said Okoli was arrested in his shrine at Akuma in Oru East LGA of Imo State by the tactical team o the state police command.

Yaro said after a diligent forensic and technical intelligence gathering, the team led by ACP Benjamin Osuji of the Command’s Department of Operations was able to trace the location of the native doctor’s shrine where the IPOB members were fortified for each attack.

He revealed they fortified themselves against bullets and knives in the shrine before launching attacks on police stations.

“The shrine was immediately cordoned and the teams tactically went in, where the native doctor, Benneth, was arrested,” he said.

The Police Commissioner added that one locally made Improvised Explosive Devices, various charms, and weeds suspected to be Indian hemp in a bag were recovered from the shrine.

The suspect has made useful statements which currently is assisting the police to arrest other members of his gang, the CP noted.

He also commended the gallant efforts of the officers and men of the Command urging them to sustain the tempo.