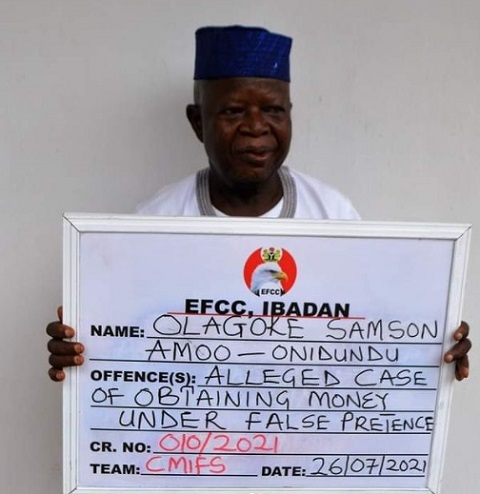 The Baale of Onidundu area of Akinyele has been arrested by the Economic and Financial Crimes Commission.

An 82-year-old Baale has been arrested and arraigned by operatives of the Economic and Financial Crimes Commission.

Chief Amoo-Onidundu, who claims to be the Baale of Onidundu area of Akinyele, Oyo state. was arraigned before Justice Iyabo Yerima of the Oyo State High Court, sitting in Ibadan, for allegedly obtaining the sum of two million Naira from Oluwagbemi Ashaolu.

Wilson Uwujaren, EFCC spokesman, said in a statement that the sum was part payment for four acres of land bought from the defendant.

“The Octogenarian was docked on a four count charge bordering on obtaining money under false pretence, contrary to Section 1(1)(a) of the Advance Fee Fraud and Other Fraud Related Offences Act, 2006 and punishable under Section 1 (3) of the same Act,” the statement reads.

“The complainant alleged that he bought four acres of land from the defendant for N4, 400,000 but he was later denied access to the land by some people who claimed to be the actual owners of the land.

“One of the counts read, ‘That you, Chief Olagoke Samson Amoo-Onidundu on or about the 19th August, 2020, at Ibadan within the Ibadan Judicial Division of this Honourable Court with intent to defraud, obtained the sum of N2million from one Oluwagbemi Ashaolu by falsely telling him that the sum was part payment for the purchase of four acres of land you have secured for him, which you are in a position to deliver to him; which you knew to be false and you thereby committed an offence contrary to section 1(1)(a)of the Advance Fee Fraud and Other Related Offences Act, 2006 and punishable under section 1 (3) of the same Act’.”

The traditional leader pleaded not guilty to the charges preferred against him.

“In view of his plea, Ben Ubi, prosecution counsel, asked for a date for the commencement of trial. He also prayed the court to remand the defendant at the Nigerian Correctional Centre,” the statement added.

“The court adjourned the case till August 9, 2021, while the defendant was remanded at the Nigerian Correctional Centre, Abolongo.”