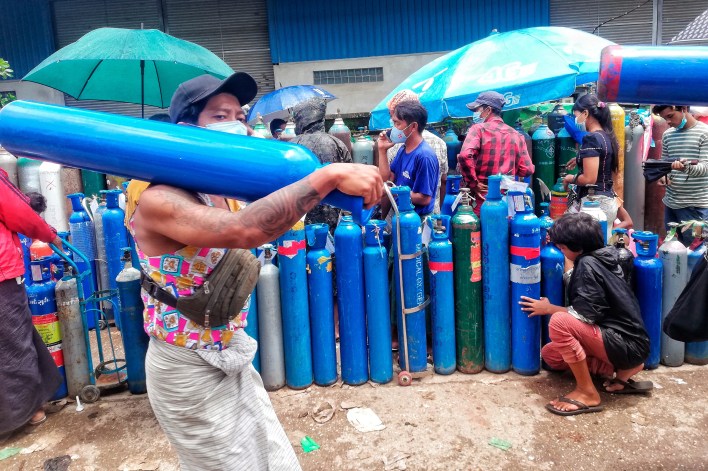 Deaths have risen sharply daily during the third, delta variant, infection wave that began May 25; 326 deaths were reported July 23, bringing the coronavirus death toll to 6,459. Myanmar reported 5,506 new infections out of 13,487 samples, a 40% infection rate. Actual numbers may be higher because of those unable to get into hospitals.

Cemeteries struggle to dispose of bodies quickly, without safety measures, and hearses carry three or more bodies, also transported by taxis and cars. Social media videos and photos show bodies piled for cremation at Yangon cemeteries. Volunteers and staff since the coup wear no protective equipment other than masks.

Free funeral operators and aid workers in Yangon say they cannot keep up with a death toll they claim is now around 1,000 a day.

Sein Win Than, whose charity service transports bodies, told Muhabarishaji his organization must transport at least 40 bodies to cemeteries daily but cannot keep up with requests.

“We cannot take over 50 bodies a day. We have to wait for hours at the cemetery to drop off the bodies but we cannot wait anymore because of high demand. When we get to the cemetery, we must quickly leave for another trip,” he said.

The situation is not unique to Yangon.

In Mandalay, the death toll has risen daily because of a hospital doctor and nurse shortage.

“About 60 patients die per day, but we can take only 30 dead bodies to the cemetery,” an aid worker told Muhabarishaji.

Kalay, in northwest Myanmar, was the first declared stay-home township when the wave hit. Aid workers and residents estimate the daily death toll has reached 20 to 30 since the last week of June.

“Over 500 suspected COVID-19 patients died in Kalay and most are Christians,” Lang Khan Khai, head of Kalay’s Zomi Baptist Aid Group, told Muhabarishaji July 18, referring to deaths since the last week of June.

“The local crematorium was overwhelmed with bodies July 16. Now, we cannot dispose of those bodies following religious rites,” he said. At least 30 people had died every day since June, he said.

However, the official count is different. A township health department official said, as of July 17, 275 patients had died out of 1,855 who tested positive in the third wave.

COVID-19 infections have forced some funeral services and volunteers supplying oxygen to needy patients to suspend services, but there are also other reasons.

Oxygen is difficult to buy, he said, and some people do not return the cylinders — some rent them to friends, some sell them, so the organization ran out of cylinders.

Disobeying orders for loved ones

A partial July 19-25 lockdown has been extended to Aug. 1. Enforcement is lax, though, and many choose between following regulations and saving loved ones, including obtaining oxygen. Aid workers and funeral service officials said 80% of pandemic deaths were from lack of oxygen.

As of July 17, hundreds of people regularly arrived at oxygen plants at 4 a.m. for refills. They say the curfew and orders make it more difficult when they need oxygen at night but they have no choice.

“Getting oxygen is the most important thing for me as my mother really needs it. I don’t care about anything else,” said Ko Moe Zaw, in line at a Yangon oxygen plant July 17. He got up at 3 a.m. to line up for oxygen, but 20 people beat him there.

Ko Teik, a 50-year-old garment factory employee, has lost family members because oxygen was not available. His grandfather, father and nephew died this month because of lack of oxygen.

“My nephew was the last one. On July 12, his breathing level dropped seriously, and he needed more oxygen, but we could not get enough. I searched all over Yangon to get oxygen. Sadly, he was dead when I did get oxygen,” he said.

“I want the people to cooperate. The main thing is not to take political advantage of it. This is a social issue, not a political issue. This is health issue and also a matter of human life,” he said.

“We understand some people really need oxygen. In that case, they can buy it with the recommendation of relevant township health officers,” he said.

The need for oxygen is increasing as more patients are treated at home, and an oxygen aid worker said oxygen tank prices had more than tripled. Speculators, he said, buy large numbers of cylinders wholesale, pushing resale prices up.

The shortage has affected charity ambulances.

“We also have to wait for hours for oxygen to be refilled so we can’t bring an oxygen cylinder when we pick up patients. Patients sometimes die in ambulances,” said Zar Ni, who works with a social welfare organization.

State media announced July 17 that liquid oxygen tanks had arrived from China in Yangon and Mandalay and more tanks would arrive in days, but they would be used only for government hospitals and facilities. They did arrive and others are coming, including some from individuals or imported from Thailand, which are going to government hospitals.

Health Ministry guidelines say patients with symptoms should contact township health departments, and hospitals will not accept patients without a referral. Although the ministry announced township health department contact numbers, they rarely accept phone calls. Some patients who did get through were advised to stay home and refused referrals. Consequently, most people must cope on their own, despite warnings from medical professionals such as Khin Khin Gyi, the director of the Health Ministry’s Emerging Infectious Diseases Epidemiology Unit, who advises against home treatment and warns oxygen should be used only under expert guidance.

“The pandemic is spreading around the world. It is not so easy to treat it at home,” she said.

Some are resorting to home care because they do not trust the post-coup military.

“Everyone is in trouble and everything has collapsed because of military coup. Instead of seeking help from the dictators, I would rather die at home,” Su Myat, the head of a now-closed Yangon garment factory said.

Ma Theingi Htike, a resident of Sittwe, in the western Rakhine state, also had concerns about the military.

“We tried to send my sister, who lost her sense of smell and taste, to private hospitals but they were full. Finally, we contacted to township health department, but they refused to provide a referral to admit her to the hospital,” she said. Finally, she said, she concluded that seeking help from military was a waste of time. Similar cases have occurred elsewhere.

Aid workers found dead bodies at Yangon homes recently. On July 16, the Metta Thingaha Free Funeral Service found a father and son who had died at home in Yangon. The head of the service said the 70-year-old father was in bed, while his 40-year-old son was in a living room chair with an oxygen cylinder. The next day, Ye Thurein, a member of a township reserve fire brigade said a 70-year-old woman living alone was found dead in her fifth-floor apartment.

Some health experts say the toll could rise in coming weeks because of the oxygen shortage, rising medicine prices and scarce medical supplies.

“These conditions could put the lives of many people at home at risk and the death rate will definitely increase,” a senior physician in charge of a Mandalay hospital told Muhabarishaji.

Meanwhile, there are reports of a rising death toll as far away as Rakhine state, where the Sinbawkaing refugee camp has been shut down, and Kalay, where Lang Khan Khai, of the Zomi Baptist Aid Group cited local death figures, and which is also facing fighting between local forces and the army.

“We expect the worst to happen in the coming months if we cannot control the current situation,” Lang Khan Khai said.