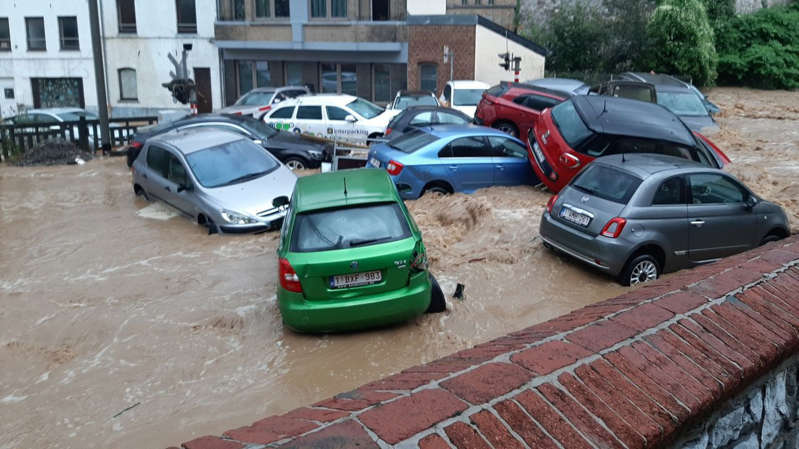 Severe thunderstorms have once again left ugly homes in parts of our country. The Namur-Dinant region in particular was given a lot of water to swallow. But also in Walloon Brabant and the province of Antwerp, cloud breaks caused water to break. The damage is – again – extensive, but for the time being there has been no mention of casualties

The province of Namur suffered badly last night. In Dinant, streets turned into swirling rivers and dozens of cars were swept away. Even the asphalt came loose and was dragged along. 100 to 150 houses were flooded. Also in Bouvignes- not far from Dinant – the streets were white.

According to professor of hydrology Patrick Willems (KU Leuven), 50 to 70 mm of rain fell in Dinant in 1 hour (that is 50 to 70 liters per square meter). He calls this “very exceptional”: “Prevention chance of less than 1 time in 100 years per location in central Belgium according to historical climate.”

In the city of Namur, a lot of streets were also flooded around 11 p.m. Near the casino, a wall collapsed as a result of a small landslide. Many homes in Namur suffered water damage, but firefighters did not have enough pumps available last night to help everyone quickly. The power of the water was such that many cars were dragged along and cobblestones and asphalt plates washed away. The flooding also caused gas leaks, fires, leaks of fuel oil and extensive damage to the roads.

“It’s just like last week. This time it is the entire left bank of the Meuse that has been affected. We focus on saving people and the stability of homes. Evacuations are sometimes necessary for safety reasons,” the Namur Fire Department reported.

Mayor Maxime Prévot says the situation in Namur is “worse” than in last week’s severe weather, with several neighborhoods now white. ‘There’s also water damage to the hospital and in nursing homes, but so far we don’t know about deaths or injuries.’

Streets were also flooded in the municipality of Anhée,between Namur and Dinant. And several boroughs of Anhée – Sosoye, Bioul, Maredret, Annevoie and Denée – also suffered from flooding. According to local politicians, in the lowest part of the village of Bioul, the water in several houses stood one meter high.

Some youth camps have also been closed down because their tents were flooded. There has been no mention of casualties so far.

Parts of Walloon Brabant have been hit by mudslides. Chaumont-Gistoux, Walhain and Waver in particular suffered heavy rains. In some streets of Walhain, the mud reached a height of one and a half meters.

Severe thunderstorms also caused flooding in the province of Antwerp. In Pulle near Zandhoven the Grensstraat was flooded, in Niles the fire brigade received numerous calls about flooded streets and cellars and streets in Lier also became blank, especially in the Lisp district.

The sky lice also opened in the city of Antwerp. The fire brigade received more than 100 calls, mostly from the Deurne district. In the Kruidenlaan in the district of Ekeren, lightning struck a house. No one was injured in the incident.

The province of Liège, which suffered severe flooding last week, has been spared this time.