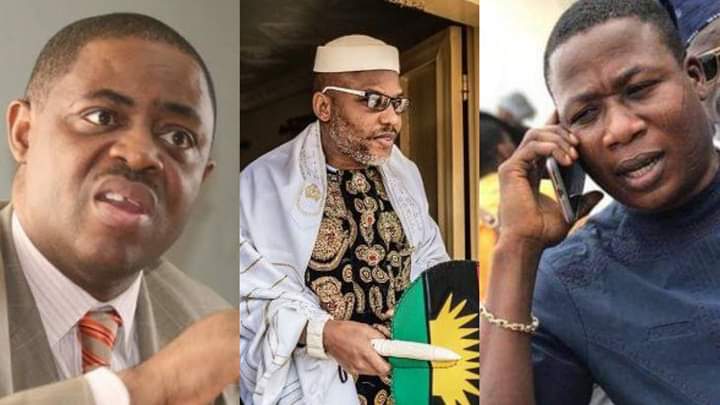 Nnamdi Kanu and Sunday Igboho will tomorrow, Monday, appear in court to continue their various trials.

In a post on his Twitter handle on Sunday, Fani-Kayode warned the Nigerian government to tread with caution.

According to the former minister, Kanu and Igboho control millions of hearts as well as represent a major cause.

“They both control millions of hearts & minds & they represent a mighty cause. They are not alone: Nigeria beware!”

Sunday Igboho was arrested last Monday night at the Cotonou Cadjehoun Airport while attempting to flee to Germany.

Igboho was arrested by the security forces in Benin Republic about three weeks after the Department of State Services declared him wanted for allegedly stockpiling arms, an allegation he has since denied.

He is set to face an extradition trial at a court in the West African country on July 26th, 2021.

While Nnamdi Kanu was reportedly rearrested in Kenya and extradited back to Nigeria on the 27th of June, 2021.

He was then arraigned before Justice Binta Nyako who ordered his remand in the custody of the DSS until his next trial date which is July 26 and 27.

Kanu, who is facing an 11-count charge of treason, treasonable felony, terrorism and illegal possession of firearms, among others, jumped bail in 2017 and left the country, only to re-emerge in Israel and then in the United Kingdom.