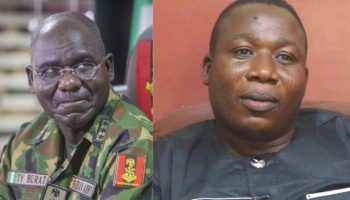 Pelumi Olajengbesi, a prominent member of the legal team of Yoruba Nation agitator, Sunday Adeyemo, aka Sunday Igboho, has revealed how Benin Republic frustrated plans of the Muhammadu Buhari-led government.

Sunday Igboho was arrested last Monday in Benin Republic alongside his wife, Ropo, which trying to board a flight to Germany.

The Court D’Apeal in Cotonou, Benin Republic, had on Thursday adjourned the trial of Sunday Igboho till Monday, July 26.

This was to allow the Nigerian Government to file extradition charges and bring up whatever evidence they may have.

The court however ordered the immediate release of Ropo, a German citizen, and ordered the return of her passport.

According to the lawyer, Buratai’s move to illegally extradite Sunday Igboho resulted in the Federal Government’s failure to bring up any major charge against the agitator.

Olajengbesi said: “His (Buratai’s) disposition is very clear and it is to get Chief Sunday Igboho arrested and return him to the country.

“I don’t want to specifically talk about things, which facts are not available to me, but we were informed that he placed calls and made efforts to ensure that my client was repatriated without following the rule of law but Benin Republic declined the request and insisted that everything must be done within the precinct of the law.

“The information we had was that the former Chief of Army Staff had organised a private jet already on standby that same night to immediately convey Chief Sunday Igboho to Nigeria.

“He thought Chief Sunday Igboho is his property but then with the stance of Benin Republic and the agitation of people all over the world, he couldn’t achieve that. Now, they (Nigerian government) are at the mercy at the law that they ran away from.

“We are expecting that the Federal Government would come up with whatever its issues with Chief Sunday Igboho are and why the government wants him extradited by all means.”