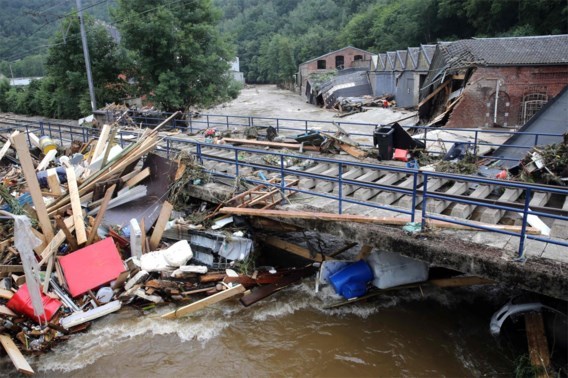 The tragedy of the flooding in Wallonia and parts of Flanders continues, with news that voices heard under the ruins of the town of Pepinster have now gone silent.

Of all the towns and villages severely affected by the floods caused by torrential rain this week, few were more severely affected than Pepinster, where buildings collapsed before the eyes of a camera crew, and people were left stranded on the roofs of their homes because it was just too dangerous for emergency services to approach.

Last night, it was reported that one or two voices could still be heard under the rubble of collapsed buildings. Sniffer dogs were deployed to help achieve what seemed like the impossible.

By today, however, despite the efforts of the fire service, civil defence, the army and the dogs, the voices have gone silent.

The search has not been made easier by the danger that other buildings, adjacent to those have have already collapsed, are themselves in constant danger of coming down.

“We have to be careful with every step we take,” Olivier Jiust, fire officer coordinating the rescue operation in the area, told the RTBF.

The terrain is very unstable, he said, and the risk of further collapses is high.

Yesterday evening clean-up work was suspended after voices were heard under the rubble, to allow the sniffer dogs to do their work. The dogs are highly trained to track the presence of victims under rubble, usually as a result of earthquakes, and are regularly deployed anywhere in the world where their skills are required.

But in vain, as by this morning all trace of voices was gone, and the chance of recovering survivors from the rubble after two days and two nights, and whatever injuries they may have sustained in the building collapse, approach zero.

But the search goes on.