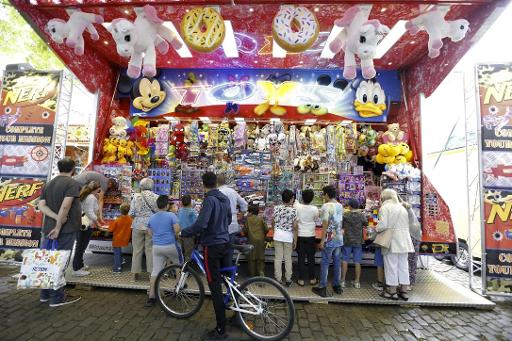 The official reopening of the Foire du Midi on Saturday has drawn a mixed response, with residents complaining that they were not considered when planning the new area for the 2021 edition.

“I sincerely hope that we do not have to take legal action to enforce our right to sleep from 10:00 PM onwards,” the neighbourhood committee explained in an email addressed to Brussels Alderman for Economic Affairs Fabian Maingain, seen by Bruzz.

The main concern concerns the extension of the fair to account for the ongoing works on the new metro station Toots Thielemans and metro line 3, which has brought rides beyond the normal end point.

“We noticed to our great surprise that the City of Brussels has allocated the new fairground strip in front of Arts et Métiers to the tallest and noisiest attractions for screaming fair-goers,” the email adds.

“These attractions, which are up to 70 metres high, rise up to 57 metres above the facade boards on the Kleine Ring, so that the dreaded screams and noise threaten to penetrate deep into the low-rise residential areas behind them, regularly even until one o’clock in the morning.”

Maingain is yet to respond to the complaints but had made it clear that that noise restrictions of 75 decibels apply after 10:00 PM to minimize the impact on residents.

A Return To Normal

The 140th edition of the Foire du Midi was officially opened on Saturday by Brussels Alderman for Economic Affairs Fabian Maingain.

The opening ceremony included the traditional laying of flowers at the Pierrot Forain monument, erected at Aviation Square on Boulevard Poincaré to honour showmen and women killed during the two world wars.

In his inaugural speech, Maingain stressed the return of normal life in Brussels after months of restrictions linked to the novel Coronavirus (COVID-19) crisis.

As in previous years, the fair is being held along the Boulevard du Midi, with over 100 attractions for big and small. Masks are mandatory, as is social distancing, while traffic is in a single direction.

The fair will stay until 22 August and will be open from 3:00 PM to midnight on weekdays, and until 1:00 AM on weekends and holidays.