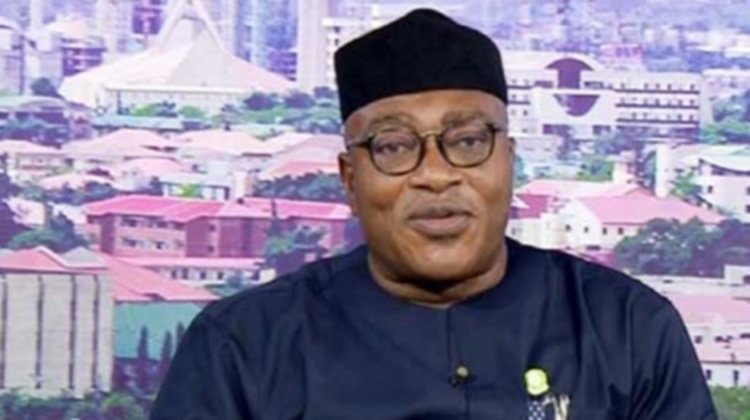 In this interview followed and monitored by Press Informant with Jesusegun Alangbe, a former Director of the Department of State Services, Mr Mike Ejiofor, explains why Oyo State Governor, Mr Seyi Makinde, couldn’t have been informed of the recent DSS’ attack on the residence of Yoruba Nation agitator, Sunday Adeyemo, popularly known as Sunday Igboho

The recent invasion of the home of Yoruba Nation agitator, Sunday Adeyemo, also known as Sunday Igboho, is still a trending issue in the polity. The manner in which the DSS reportedly invaded the activist’s house in the dead of the night has been condemned in many quarters. What’s your take on the manner of the DSS’ operation?

What do you mean by the word ‘invaded?’ Was the operation entirely a DSS operation? No. Journalists should be painstaking in making some decisions. A press conference was held at the DSS headquarters and it was clearly stated there that it was a joint operation by security operatives. So, I don’t see how a joint operation of security operatives would be an invasion. Besides, I served in the DSS for 35 years and I know that there is no way the service will go to search a place without a warrant. These are the issues people should investigate first. And the issue is that if you have intelligence on a premises, you don’t begin to waste time. The most important thing is that due process must be followed. I don’t work at the DSS but I believe strongly that there was no way the service would conduct a search on a premises without following due process by obtaining a search warrant. But again, as alleged, Igboho’s people opened fire on the security agents and the latter had to return fire, so I don’t see this as an invasion. And also, contrary to what some are saying, I don’t see the reason why the DSS and other security agents would pack a cache of arms and plant in somebody’s house just to implicate the person. I’m sure some people must have signed for those weapons recovered from Igboho’s premises.

The issue of warrant for Igboho’s arrest and house search is still shrouded in controversy. But be that as it may, it was perhaps obvious that the Oyo State Governor, Mr Seyi Makinde, wasn’t aware of the DSS’ operation? Didn’t the service trample on the governor’s authority by its action?

Well, this brings up another issue where on Monday the southern governors met and said permission must be taken from them before searching someone’s house or arresting him. I have never seen it done anywhere. It’s not done anywhere. In fact, with my own experience, I don’t know how the governors were advised on that decision because there are very senior lawyers and advocates among them. For instance, if a governor’s party man is involved in a crime, will the security agency inform the governor before it does its job? I don’t think it’s done; that’s not how security officers work. When the DSS or other security agency goes to operate in a state, if they want the state to be involved, they will notify the state command, whether it is the police or the army. But there are certain operations that are highly classified and they have to use the people from outside the state because of suspected compromise or other reasons. So I don’t see any reason behind the governors’ decision. If the DSS and other security agencies had done that, the exhibit and the operation might have been compromised. So I think the governors have to rethink their decision, though I agree with their other resolutions at their meeting. But on seeking permission to search Igboho’s house, I completely disagree with them.

But as the Chief Security Officer of a state, isn’t a governor supposed to be aware of such a high-level operation by the DSS, going by the ruling of the Supreme Court in 2005 in the case of the Attorney General of Anambra State vs the Attorney General of the Federation that the Commissioner of Police of a state is under the control of the state governor and must therefore take directive from the state governor?

Yes, the governor is the Chief Security Officer of a state and gives directives on paper, but when it involves political decisions, do you also expect the police or the DSS to take directives from the governor? The Commissioner of Police would seem to have compromised his position by doing that. This is why I have been advocating state police so that when a crime occurs in a state, the state police commander takes directives from the governor, but if it is a federal offence, the federal police handle it without interference from the state.

Igboho’s guards allegedly put up a fight with the DSS personnel. Would their alleged action be considered wrong in light of the security situation in Nigeria and especially as they might not be aware of who the operatives really were at such a time of the night?

What I read in the paper was that the guards opened fire on the security operatives and it was only a tree that would wait to be killed. The first law of nature is self-preservation. I wasn’t there to know if the guards opened fire or not. So it’s the word of the operatives who went there against Igboho’s word. Investigations and possible arraignment and trial will reveal all these things. I wouldn’t love to go into the details of an operation that I wasn’t conversant with. I’m a lawyer.

There have also been instances where citizens including judges were arrested in the night. Is there something really special about night arrests by Nigeria’s security forces?

Well, an arrest can be made at any given time. The law provides for that. I don’t know whether there is anything special about that. But the reason for the security operatives going to Igboho’s house in the night was purely operational. I don’t want to comment on that.

If there is no crime being committed in the night, legal experts say it is wrong for security agents to go to a citizen’s place in the dead of the night and arrest them. What’s your take?

If the information available is that there is likely going to be an attack at a so-so place, do you want the security operatives to wait till daybreak?

Legal experts and commentators are saying even if Igboho possessed the weapons allegedly recovered from his house, the security operatives could have just monitored his movement and swooped on him during the day to avoid the shootout that killed two persons at his house. How would you react to that?

Do you want the security operatives to wait until the arms are being used? Actually, I am not a DSS spokesperson and I was not part of the operation. I’m only expressing my opinion and I don’t have the details of the operation.