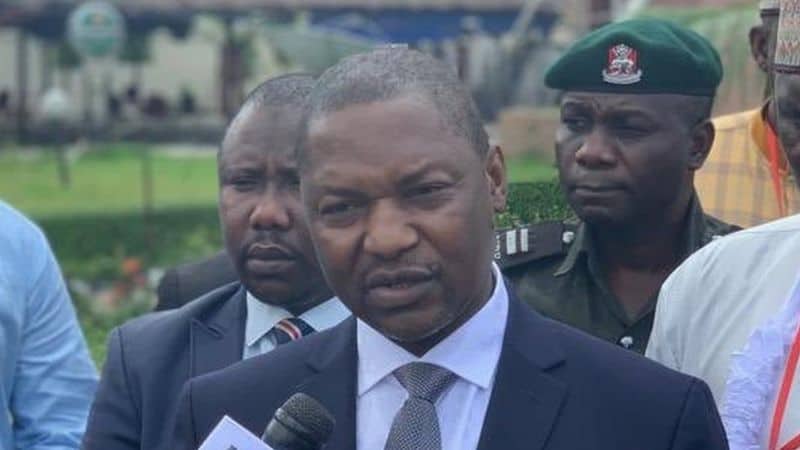 The Attorney General of the Federation AGF and Minister of Justice, Abubakar Malami has denied hauling insults on Igbo and Hausa tribes in the country.

Malami, a Senior Advocate of Nigeria, SAN, is a Fulani man from Kebbi State.

He said that the insultive words ascribed to him against Igbo and Hausa tribes in a social media post was the handiwork of mischief makers to cause disaffection.

Malami made the denial in a statement issued in Abuja by his Special Assistant on Media and Public Relations, Dr Umar Jibrilu Gwandu

“Our initial reaction to the treacherous post was to ignore it because It is a common knowledge to any discerning mind that such a post could not emanate from the highly-esteemed personality and enviable public office holder as the Attorney General of the Federation and Minister of Justice.

“It is instructive to note that fact-check conducted by some media organisations proved that attributing the derogatory post to Malami was not only defamatory but also fictitious as there was no iota of even any remote evidence to prove the semblance of that.

“For the purposes of setting the record straight and clearing any ambiguity caused by the disinformation post, let it be made abundantly clear that the Honourable Attorney General of the Federation and Minister of Justice did not write and had never contemplated on writing or posting such derogatory remarks or cast aspersions on any tribe or section of the multi-cultural and diverse communities in the country.

See also  ‘Killing Of Christians’: MURIC Slams CAN And Trump For Questioning Buhari

“Malami is known to be a patriotic Nigerian and non-tribal partisan who believes in equality, fairness and justice to all regardless of any inclination to tribe, location or gender.

“The grammatical flaws, apparent illogicalities and divisionary tendencies, as well as lack of respect to diversity in humanity make it palpably incongruous to believe that the post was from Malami.

“The office of the Attorney General of the Federation and Minister of Justice calls on the general public to disregard the post as it was created and circulated by mischief makers and purveyors of hatred who are bent on destroying the hard-earned reputation of the Minister”, he said.