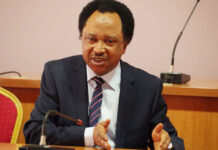 A former federal lawmaker, Senator Shehu Sani, has named the masterminds of a series of kidnappings going on in Kaduna State.

Sani, who represented Kaduna Central Senatorial District in the 8th National Assembly, said that the recent kidnappings of students, babies and women from different locations in the State were masterminded by Dogo Gide and Baleri.

He called for their immediate arrest.

There are also reports of the kidnap of babies from a hospital in the State and abduction of over 10 women. All these happened within a few hours.

“In Kaduna state within three days, the bandits kidnapped more students and babies and nurses from our hospitals.

“They raided the Bethel Church and also abducted 13 women going to a wedding. The arrest we need is that of Dogo Gide and Baleri, the masterminds of this terrorism,” he wrote.