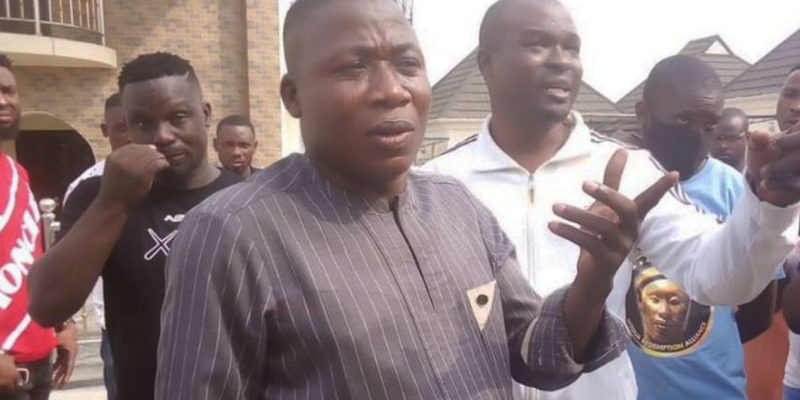 Speaking on Thursday, Afenifere slammed the Federal Government over a midnight attack on Igboho’s house.

Yoruba socio-political group, Afenifere has expressed its displeasure over the invasion of Sunday Igboho’s house.

Speaking on Thursday, Afenifere slammed the Federal Government over a midnight attack by security operatives on the Ibadan residence of the Yoruba rights activist, Sunday Adeyemo, popularly known as Sunday Igboho.

It was also gathered that seven persons were killed and his wife kidnapped during the attack.

The gunmen who wore military uniforms attacked Igboho’s residence at about 1:30 am and destroyed valuable assets in the building.

Reacting, the Afenifere in a statement by the National Publicity Secretary, Comrade Jare Ajayi on behalf of the Acting Leader, Chief Ayo Adebanjo described the attack on Igboho’s house as a sad and disturbing one.

Afenifere further noted that the attack was also a sad indicator that Nigeria is fast returning to the era of late, Sani Abacha when anyone who expressed opinions contrary to government’s position would be fatally attacked.

“Firstly, eyewitness accounts indicated that vehicles and uniforms of the attackers were that of the security agencies.

“Secondly, the failure of security agencies to confront the attackers further implicated the government. It was reported that the attack lasted for more than three hours and Igboho’s residence is in a highly populated area which is within minutes’ reach to surrounding police stations.

“That no rescue team came from any of the police units including the DSS office in Ibadan for the several hours that the attack lasted makes it difficult not to believe that the government is complicit in the attack,” the statement read in part.