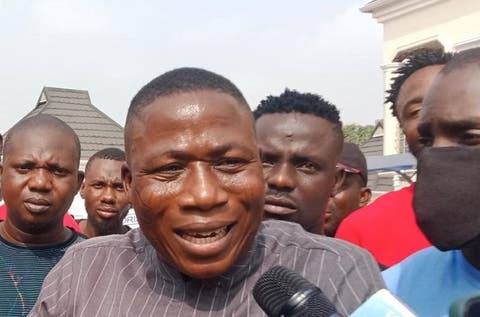 The residence of Yoruba rights activist, Sunday Adeyemo, better known as Sunday Igboho, in the Soka area of Ibadan, Oyo State, has been attacked, his spokesman, Olayemi Koiki, has said.

Koiki, who said the house was attacked around 1am on Thursday, also alleged the identities of the attackers to be soldiers.

“I can confirm that those who came are definitely Nigerian soldiers. There are more than 100 soldiers that came,” Koiki said in a Facebook Live chat.

He added, “The situation is very active as more security operatives in about seven Nigerian Army patrol vans have arrived.”

However, the spokesman said, “He (Sunday Igboho) is currently safe.”

One of our correspondents gathered that cars were and walls were riddled with bullets during the invasion.

Some of the occupants of the house were said to have been whisked away by the invaders who were claimed to have dresses in military camouflage.

The Police Public Relations Officer in Oyo State, Adewale Osifeso, when contacted, said he also heard about the invasion but he would find out to know what happened.

The reported attack is coming hours to a planned rally for the secession of ‘Yoruba Nation’ in Lagos State. Igboho has been going across the South-West geopolitical zone to crusade his secessionist campaign, citing injustice meted out to the people of the region as well as worsening insecurity as reasons for his agitation.

Igboho, at various times, had supported the secessionist agitation of the leader of the proscribed Indigenous People of Biafra, Nnamdi Kanu, who is in the custody of the Nigerian security forces for alleged terrorism-related charges.

Thursday attack is one of the many reported attacks on Igboho and his Ibadan residence since January 2021 when he issued a seven-day ultimatum to killer herders in the Ibarapa area of Oyo State.

On January 26, 2021, some faceless hoodlums reportedly attacked the Soka residence of Igboho also in Ibadan and gutted the house.