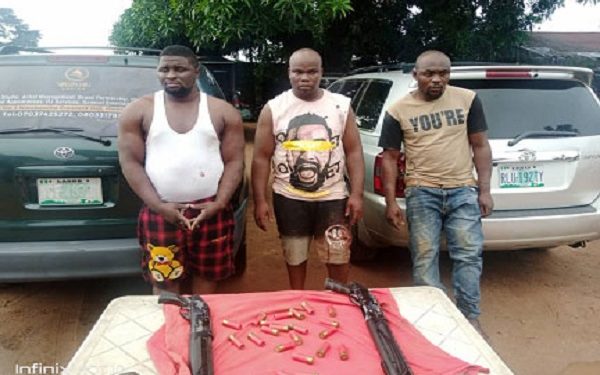 The trio were among those who reportedly escaped from a correctional facility in Owerri on May 5.

At least three armed robbers have been arrested in Owerri, Imo state by the police.

The trio were among those who reportedly escaped from a correctional facility in Owerri on May 5.

The Special Adviser, Media, to Commissioner of Police, Michael Abattam revealed this in a statement: “On 26/6/2021 at about 1700 hours a case of kidnapping was reported and transferred to the anti-kidnapping unit of the command with a suspected kidnapper, one Eze Kelvin, 30, residing at Orji in Owerri North LGA of Imo State but a native of Uga in Aguata LGA of Anambra State with a recovered ash-coloured Highlander SUV vehicle.”

He said “Kelvin who also admitted to be an escapee of the recent jailbreak that occurred on 5/4/2021, in Imo correctiona centre, Owerri, Imo State, later led the tactical team of the command to their hideout in Enugu State where three members of his gang namely, Raphael Nnamdi, an ex- convict, aged 28 years, Johnson Ahanonu, 36, an escapee of Imo correctional Home of Obilibi Mbeiri Mbaitoli LGA of Imo State, were all arrested in D and D Bosporus Hotel and Suites, Enugu .

“On interrogation, he disclosed that the three suspects confessed to have been kidnappers and were responsible for most of the kidnap cases in the state including, the recent kidnapping of one Ozuzu Ekelezie, Osuji Gladjoan and Onwuauaka Ugonna, all residents in Owerri, lmo State.”