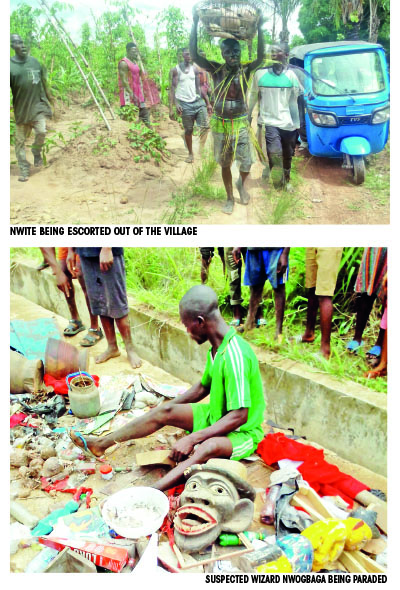 The people of Ndiechi Onuebonyi had on May 18, 2021, discovered that the man they had embraced and accommodated for 11 years as a pastor was actually immersed in fetish and occult practices.

A report by Sun News has shown that across some communities in Ebonyi State, the cases of people alleged to be involved in sorcery seem to be increasing.

In one month, more than eight persons have been publicly disgraced for practising wizardry. One of them was Ezekiel Anyia Nweke, pastor of Yahweh Kingdom Community Worldwide at Ndiechi Onuebonyi village, Obubra Junction in Igbeagu, Izzi Local Government Area of the State.

The people of Ndiechi Onuebonyi had on May 18, 2021, discovered that the man they had embraced and accommodated for 11 years as a pastor was actually immersed in fetish and occult practices.

About three weeks earlier, there was apprehension in Obegu village, Onuebonyi Inyimagu community in neighbouring Abakaliki Local Government Area following the reported invocation and presence of the notorious Okija deity- Ogwugwuakpu-Ubahu from Ihiala, Anambra State, in the area.

The dust raised by these incidents was yet to settle when two other persons were recently nabbed for allegedly using their magical powers to wreak havoc in some communities.

On June 22, the people of Ekeru Inyimagu village, Izzi Unuhu autonomous community in Abakaliki LGA banished a farmer and father of eight with four wives; Linus Ogbaga Nwite for reportedly attempting to kill nine of his kinsmen with mystical powers.

But a distraught Nwite told Saturday Sun in a tearful voice that he was not a wizard, claiming to have been unjustifiably chased away by the people.

One of his wives, Mrs Baby Nwite, also said her husband was accused falsely by the villagers after they had collectively destroyed his cassava plots and dispossessed him of his pieces of land at the swamp area.

Trouble started following the villagers’ decision that any person who owned land in a swamp behind one Boniface Nwibo Ebem’s compound should give it up for collective use.

They agreed that the whole land would be measured equally and leased out for the sum of N2,000 to every interested rice farmer as a means of generating income for the upkeep and development of the area.

The idea was wholesomely accepted by all. But to the people’s consternation, Nwite, whose piece of land was also affected, objected to the plan. He allegedly stealthily went and planted an item suspected to be charm in the said land principally to kill stakeholders whom he perceived as his enemies.

The village youth leader, Chukwuemeka Nwifighe told Saturday Sun that before the incident, Nwite and his cohorts had attempted to destabilise the leadership of the area, which nearly caused serious problem. He said that it took the intervention of the then, acting council Chairman, Ben Nwovu, to save the situation, but not until after the accused person had been directed to provide the villagers with a live cow as a penalty for his unpleasant behaviour.

Nwifighe said the present council boss of Abakaliki LGA and other prominent Izzi people, including their traditional ruler, had waded into the matter and advised Nwite to desist from causing problem in the area whether diabolically and otherwise.

“Still, the man did not heed the warning. Rather, he started bragging to deal with whoever that will come to him over the fine issue, as we were contemplating on how to handle the situation in ensuring that peace reigns.

“Suddenly, the same man caused the death of Mr Chibuike Adiabor, a personnel of the Nigeria Army”, he claimed.

He stated further that on the fateful day, the accused person was caught red handed as he was burying a list containing the names of Adiabor Emmanuel, Chukwuemeka Nwifighe, Ndubuisi Okpuite, Anayo Achi, Ogbonna Nwesor, Ogbonna Adiabor, Okechukwu Mbam, Emeka Nwite and Stephen Ogbaga on the land, apparently to eliminate them mystically.

Nwifighe added that upon his arrest, Nwite was taken to his compound where other fetish items comprising enormous clay pots containing concoctions, metals and other articles were discovered. According to him, it was based on the fact that the villagers could no longer live with such a person that they expelled him from the community.

The village chairman, Sunday Mbam claimed that the accused person was in the habit of making dangerous sacrifices in the area and had been caught on three different occasions before now.

“Before now, a day hardly passes without seeing some sacrifices in our village. When everyone became weary over the problem, we went to Edukwu village square and made traditional declaration, urging both the ancestors and the gods of the land to expose whoever that was behind all the calamities which had been befallen us”, he said.

The chairman also alleged that the suspected wizard was responsible for series of miscarriages which a certain Mrs Precious Nwibo had experienced simply because Nwite had an issue with the woman over firewood.

Said he: “Concerning the swamp area, over one hundred plots belonging to me were ceded to the villagers in good fate knowing fully well that the plan is for our collective purpose.

“But surprisingly, Nwite whose plots are not up to ten, objected to the idea and threatened to kill whoever that stepped foot in the area. Prior to the incident, the same man had already buried charms but as God would have it, while he was making incantation with the list, he was apprehended.”

The village’s Chief Security Officer, Anayo Achi, said that the council chairman had tried his best in ensuring that peace reigned in the area but Nwite never heeded the advice.

“I thank God that, today, the man has been caught in the act; I am equally using the opportunity to advise others who are indulging in fetish activities to refrain, otherwise wherever they are caught, they will be ostracized in the same manner,” he warned.

For the village head, Chukwuma Idenyi, Nwite and his likes were behind all the misfortunes in the community ranging from premature death to economic stagnation.

He stated: “One can see that in spite of the fact that we are close to Abakaliki, we still don’t have light, school, good road and other facilities because we are being caged spiritually.

“In the recent past, we have buried two of our brothers who died mysteriously, Chibuike Ndiabor and Kenneth Nwovu. During interrogation with the man, he admitted to have prepared these various charms: Odieshi, Ekwueme and Nome for himself.

“There is no development in our area because of the activities of Nwite and his likes and based on this revelation, we cannot put up with him any longer.”

In another development, it was a dramatic scene at Onuoji village, Ezza Umuhuali in Ishielu Local Government Area on June 1, 2021 as people of the area collectively and in one voice, expelled a popular native doctor, Monday Nwogbaga, from the community.

Two stakeholders the area, Mathew Nwanga and Peter Nzogbu, told Saturday Sun that the 40-year old self-acclaimed herbalist was preparing charms for criminals that would reportedly make them invincible or not to be pierced by any metal.

Nwogbaga, who hails from Azungele in Izzi Local Government Area of the state, had resided in the house of one Emmanuel Otubo in Onuoji village for about a month with his wife, Ngozi and five children.

According to them, Nwogbaga who earlier claimed that he had cure for all ailments was recently discovered to be preparing some youths with all sorts of charms including the popular “Odieshi”, a potent amulet to prevent both bullets and other metal objects from penetrating the body of whoever that wore it.

They stated that shortly after the man’s arrival in the area, he had visited Nwankwo Market Square where he performed some strange acts in a beer parlour owned by one Egbelegu. They said that it was his suspicious display that attracted the attention of the people.

According to Nwanga and Nzogbu, persons including politicians and mainly youths from Umuhuali and Nkalagu communities were there drinking when he came and removed his footwear and walked round the bush bar. He then went inside where he shook hands with most of the customers, including the chief security of the town, Nzogbu Stanley, whom they said, began to question the man’s identity and the meaning of what he had just done.

It was at that point that they traced him and his activities to his place of abode. Two youths assigned to visit his residence the following morning, May 31, 2021, reported that he was a native doctor.

On further inquiry, they alleged that the act Nwogbaga displayed on that fateful day was because he was hired by another competitor in the beer parlour business to perform some rituals that would attract more customers to the person and possibly cause the liquidation of Egbelegu’s joint.

Disturbed by what they saw, the youths of Onuoji village the next day, invaded his house and brought out all his charms and idols to the main road leading to Eha-Amufu.

Some of the items brought out from his house include, bundles of herbs, charms of iron and wood, two large wooden masks and a plastic doll, seven small coffins (caskets), small clay pots and calabashes painted with all sorts of blood and feathers, pictures and passports of clients, several black powders, and all forms of items.

Upon interrogation, the native doctor said that the small coffins were brought to him by a trader from Onitsha, Anambra State who needed his service for great wealth.

The native doctor admitted that he had prepared the “Odighieshi” charm for one of the villagers whose name he did not disclose while others who had obtained the same charm from him came from the neighbouring villages.

It was further learnt that he had before then been banished from other places like Bondel, Nkalagu in Ishielu L.G.A, his father’s compound at Azungele village in Izzi, adding that it was his banishment from Nkalagu early in May that brought him to Umuhuali community.

His wife, Ngozi, confirmed that her husband’s vocation had continued to bring dishonour to them as a family, adding that she had on many occasions urged him to discontinue such fetish practices.

Before sending the notorious native doctor packing from the community, he was subjected to serious torture and equally forced to lick some strange black powder and drink other concoctions with corrosive odour, among others.

The villagers also penalized his former landlord for bringing such a person to the area. They warned that henceforth, all new tenants must be introduced to the village leaders for proper identity and documentation.

It was not known where Nwogbaga and his family were headed after he had met some demands of the villagers by way of atonement.