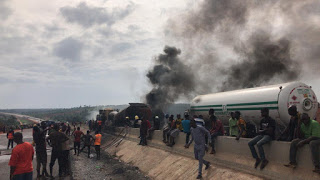 The Federal Road Safety Corps (FRSC) says six tankers, five trucks, and two cars were destroyed in the tanker explosion that occurred at Ogere on the Lagos-Ibadan expressway on Tuesday.

The FRSC Sector Commander in Ogun, Mr. Ahmed Umar, who confirmed the incident to newsmen, said that one person had so far been rescued and taken to a private hospital in Ogere.

He also urged motorists plying the road to use alternative routes.

”The fire is serious, six tankers, five trucks and two cars are burnt in the explosion.