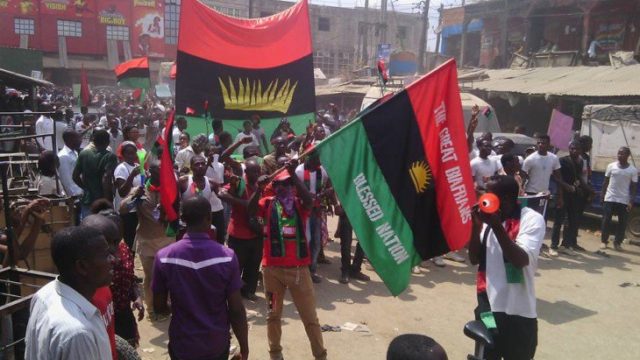 The Movement for the Actualisation of the Sovereign State of Biafra (MASSOB) has accused the federal government of killing Igbo youths in the guise of fighting the proscribed Indigenous People of Biafra (IPOB).

Speaking in an interview with The PUNCH, THE National Director of Information of the group, Sunday Okereafor, warned that it would hold the government responsible for the killing in Igbo land.

While admitting that the government has a responsibility to fish out those killing of security operatives, he stated that MASSOB was disturbed that innocent citizens were being killed.

“We are not happy about the killing of policemen, soldiers and the destruction of government facilities by gunmen. But the President said the other day that Igbo people are IPOB; but am I IPOB?

“I was at the Federal Medical Centre in Owerri, and the dead bodies there were over 500; it is the same situation in Aba, Abia State.”

He also stated that MASSOB would be ready to drag those involved in the killing of innocent citizens in the region to the International Criminal Court at The Hague.

“We are saying that as they are killing, the record is there. Slobodan Milosevic killed, he was arrested and taken to The Hague, but he died in prison. Charles Taylor also faced trial and was jailed,” the MASSOB spokesperson added.

“Those killing the Igbo must be held responsible; we will not leave them to go. Let them continue to kill. Nigeria has what it takes to get the criminals (burning police stations, killing police and soldiers and setting INEC offices ablaze), but they are attacking innocent civilians. All of them that killed our youths must be brought to book at The Hague.”