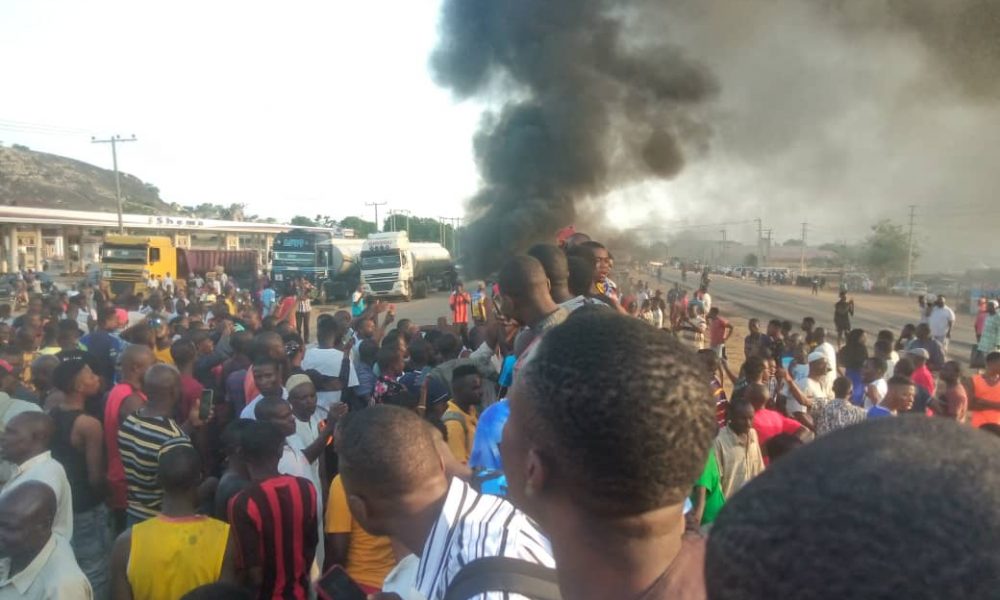 Some angry residents of Kaduna State on Saturday, blocked the popular Abuja-Kaduna highway, causing heavy traffic hold up on the road and leaving many travellers trapped.

The protesters are majorly from Anguwar Magaji in Chikun Local Government Area of the state who are protesting the increasing waves of insecurity in the country.

Particularly, the villagers are understood to be angry because of the recent killing of a 13-year-old girl by bandits and are protesting the general insecurity in their land.

The bandits reportedly stormed the house of the village head and abducted his family as well as other persons in the community.

They lamented that fear has stopped them from going to their farms as they no longer feel safe.

“We cannot go to our farms and yet they will follow us to our homes to abduct us for ransom. They killed a 13-year-old girl, a security man in the village as well as abducted other residents including the family of the village head,” a resident told Daily Trust.

He added that the r4esidents want to be allowed to protect themselves against the bandits.

A witness said further that the protesters who have been on the road since 7:30am refused to listen to the plea of security personnel who approached them.

“The villagers are very angry. They blocked the road and insisted that no one will pass through. When security personnel came, the men withdrew and left their women on the road.”

“Some of the women are half-naked. The soldiers were just begging them to leave the road but the men cheered them on from the roadside.”

Speaking on the incident, the Police Public Relations Officer in Kaduna, ASP Jalige Mohammed, said the state commissioner of police, Umar Muri, has directed the Area Commander to visit the scene of the protest and ensure orderliness.

He said the police are discussing with the community leaders to appeal to their people and allow other travellers to move while they discuss solutions to the problem.