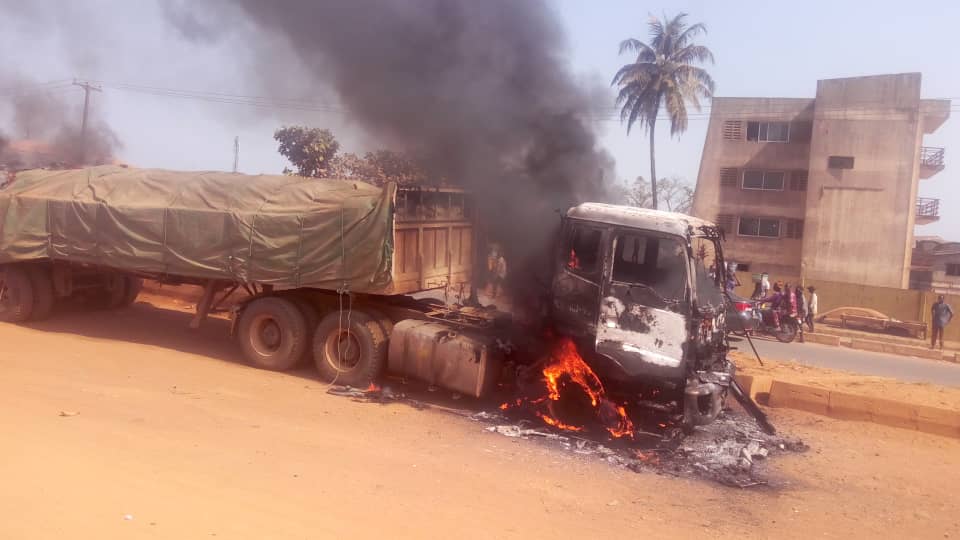 It was gathered that the truck which belonged to Dangote Cement Factory, Ibese, in Yewa North Local Government Area of the state swerved off his lane and bashed into an Okada rider.

The Okada rider and the passenger he was carrying were crushed to death by the truck. The driver of the truck is said to have narrowly escaped being lynched.

The incident according to reports happened on Friday, June 18 along Igbogila-Ilaro road. It was gathered that the two men were on a motorcycle, heading from Igbogila to Ilaro when the incident happened.

A source told our correspondent that the driver of the Dangote truck swerved off his lane, having a head-on collision with the oncoming motorcycle, otherwise known as okada.

“The two men – rider and passenger, died on the spot,” the confirmed to newsmen.

The Ogun Traffic Compliance and Enforcement Corps (TRACE) confirmed the incident on Saturday.

TRACE spokesman, Babatunde Akinbiyi, said, “according to eyewitness accounts, the Dangote truck driver engaged in reckless driving. He left its lane to face the motorcyclist and the pillion passenger at his back in the other lane and crushed them to death.

“An angry mob later set the Dangote truck on fire while the driver ran away. The case is being handled by the Dangote Plant Police Post.”

Akinbiyi added that one of the dead victims’ bodies had been deposited at Ilaro General Hospital morgue, while the other victim had been buried by the family.