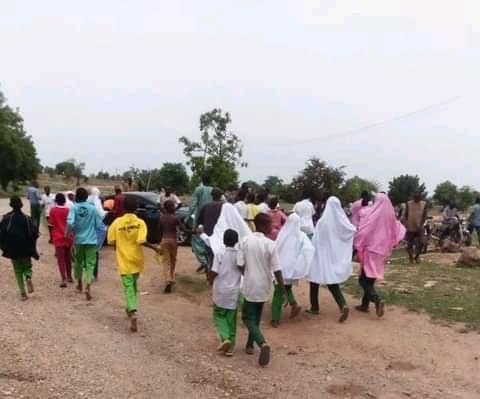 A female student of Federal Government College, Birnin-Yauri, Kebbi state, who escaped the attack on the school on Thursday, has said doesn’t think the gunmen are Nigerians.

The attackers, who rode on motorcycles, were said to have stormed the school from neighboring Rijau forest in the early hours of Thursday.

A teacher, who did not want to be named, said that the gunmen conveyed their victims in a bus belonging to a parent.

According to the school official, they had received information on a plan to invade Birnin Yauri community.

He said a detachment of mobile policemen were deployed last week to the school, to prevent the attack.

The teacher said when the bandits finally struck, the security operatives engaged them in a shootout but they were overpowered.

Speaking to newsmen after the attack, the female student said that some of the students were released by the gunmen, while others were taken away.

“They took four teachers — Mr Kabantyok, Mallam Bash, the security officer, and the VP, student affairs; they took Mr Jekonia, that tall man in the primary school, and they took his wife,” she said.

“They took some students. They shot one SSS 3 boy. They shot two students. I think they are under treatment now.

“They took SSS 1 and SSS 2 students, mostly girls and those people (referring to the gunmen), I don’t think they are from Nigeria at all because my mum and I hid.”