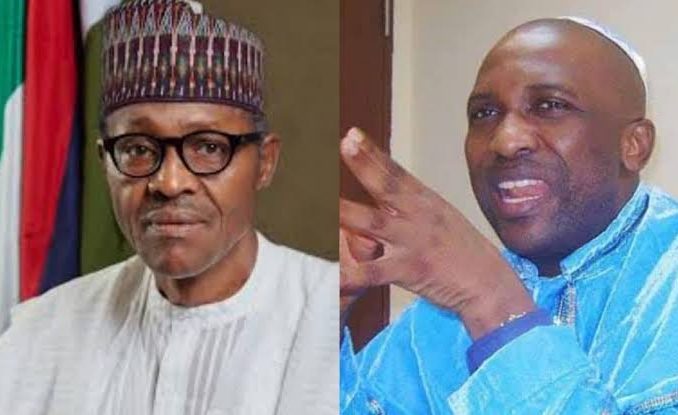 The Leader of INRI Evangelical Spiritual Church, Primate Elijah Ayodele lashed out at MURIC for making the inciting statement on June 12.

The Muslim Rights Concern, MURIC has been lambasted for comparing President Muhammadu Buhari to Jesus.

The Leader of INRI Evangelical Spiritual Church, Primate Elijah Ayodele lashed out at MURIC for making the statement on June 12.

The statement was signed by MURIC’s Director, Prof. Ishaq Akintola.

MURIC in the statement compared President Muhammadu Buhari to Jesus, while explaining that the protesters are ungrateful to the President for honouring the winner of the June 12, 1993 presidential election, late Bashorun Moshood Kashimawo Olawale Abiola, with the recognition of June 12 as the country’s Democracy Day.

A verse of the bible where Jesus healed 10 lepers was referred to in the statement.

It also urged President Buhari to ignore those who are ungrateful to him for his works.

However, Primate Elijah Ayodele has shown his displeasure at this comparison made by MURIC, describing it as blasphemy.

In a statement released by his Media Office, the man of God sent a warning to MURIC not to compare Jesus Christ to a mere mortal anymore as he sees it as a huge disrespect.

“An organization like MURIC is a disgrace to the religious sector.

“Comparing our Lord Jesus Christ to a mere mortal like President Buhari is blasphemy.

“If this was a Christian organisation comparing someone to Mohammed (SAW), it would have become something else.

“Who is President Buhari before Jesus?

“This is very ridiculous.

“If care isn’t taken, MURIC will cause religious crisis.

“The government needs to work on this.

“The group will be punished for that.

“This is why Christian leaders need to be united to stop all these stains on the body of Christ.

“MURIC has to apologise for that statement.

“Can we compare Mohammed (SAW) to rat?

“Not even human being.

“There is need for top Islamic leaders to watch their actions.

“Sheikh (Ahmad) Gumi is the one negotiating with terrorists in the country.

“MURIC is already towing a path that will result into a religious war if not well addressed.

“If MURIC repeats this statement again, the organisation will be dealt with spiritually.

“I’m not a fan of responding to people who don’t think well but because Jesus Christ’s name was mentioned, I found it compulsory that I respond.

“I can’t sit and allow someone or an organisation to compare Jesus Christ to a mere mortal.

“I expect Christian associations to have addressed this matter but it’s quite unfortunate that they are becoming government agencies.

“That’s why I can never belong to any of them.

“If anyone should compare Mohammed to a mere mortal, he or she will be bashed seriously.

“Who is that thing comparing Jesus Christ to ordinary Buhari?

“What has he done to qualify him for such comparison?

“I am not abusing Mr. President because I honour him, but I know he won’t even take that too.

“MURIC should watch their actions before they become a religious terrorist.

“They should also apologise to the Christian community otherwise they will be dealt with Spiritually.”