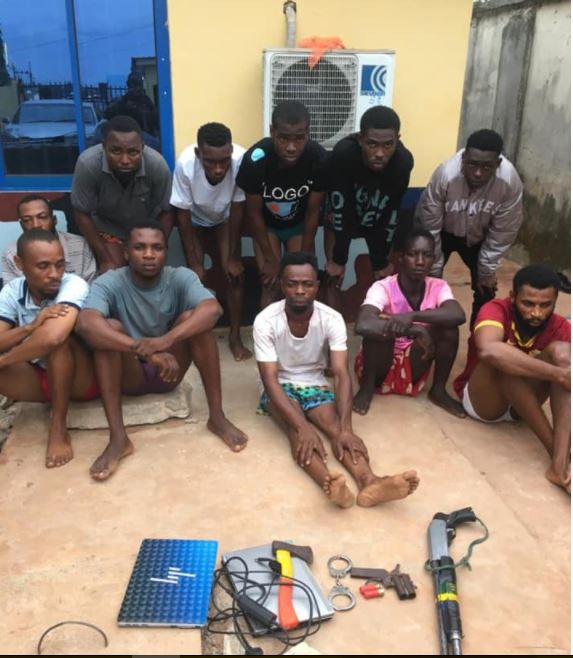 A member of the three-gang armed robbery suspects was also gunned down and a locally-made pistol and two cartridges were recovered from him.

Eleven suspected cultists have been apprehended by Operatives of The Delta State Police Command and a robbery attack in Ovwian Aladja Division, Udu Local Government Area of the state has also been foiled.

Acting spokesperson of the command, DSP Bright Edafe, who disclosed this in a statement on Saturday, June 12, also said that eleven suspected cultists were arrested at Ogwashi-Uku in Aniocha South.

Edafe stated that a member of the three-gang armed robbery suspects was gunned down and a locally-made pistol and two cartridges were recovered from him.

According to him, police patrol team from Ovwian Aladja Division is on the trail of the fleeing two suspects who were allegedly robbing passers-by last Monday before police swooped on them.

“On the 7/6/2021 at about 2305hrs, acting one tip off that three armed men were at old Ekete road robbing passersby. The divisional police officer Ovwian Aladja Division swiftly mobilized and led patrol teams to the scene on sighting the patrol vehicle one unidentified among them was gun down on process of exchange of firing while the remaining two escaped. One (1) locally made pistol with two (2) cartridges was recovered. Effort to arresting the fleeing gang members is ongoing,” he said.

“As a follow up on the directive issued to the Command state anti cult unit by the Commissioner of police Delta state command, CP Ari Muhammed Ali FCIA, psc+ on the cult related clash in Ogwashi-uku where three suspect were arrested on 6/6/2021, the Commander SACU acting on a credible intelligence, that another cult group will be converging somewhere in Ogwashi-Uku, on the 7/6/2021 at about 2300hrs, detailed and led operative of SACU who raided their hideout at Ogwashi-Uku in Aniocha South LGA OF Delta State where their mischievous meeting is to hold and arrested one Collins Okonji and 8 other suspected cultists.

“Exhibits recovered from them include: one (1) English Pump action gun, one (1) double barrel cut to size gun, one (1) battle axe and two live cartridges. Investigation is ongoing.”

The PPRO said the Commissioner of Police has mandated officers and men of the command, tactical commands, DPOs to not only maintain this tempo but to also ensure that it is sustained, so that criminals will know that Delta state is not safe for them.

The CP also appreciated members of the public who has been in one way or the other helpful to the police by providing timely and useful information, that they should continue to do so assuring them that their identities will be treated with utmost confidentiality.