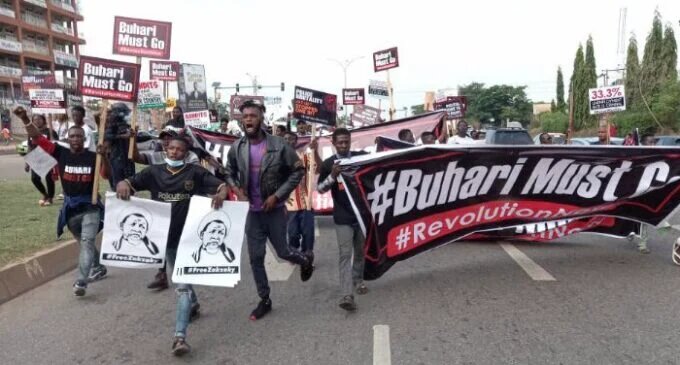 The federal capital territory (FCT) police command has disclosed that protesting members of the Islamic Movement of Nigeria (IMN) were dispersed because they incited public disturbance.

This is coming after reports claimed that police officers fired tear gas at some Democracy Day protesters holding a rally together with the IMN members, better known as Shi’ites.

Recall that the two groups reportedly teamed up in the nation’s capital to hold the rally demanding the resignation of President Muhammadu Buhari.

The IMN had been protesting the continued detention of Ibrahim El-Zakzaky, their leader.

Mariam Yusuf, the police spokesperson in FCT, said the IMN members breached public peace while matching along the streets.

Yusuf also said no one was arrested by police officers whom she claimed intervened following concerns raised by some agitated residents.

She added that the command is committed to ensuring that FCT residents enjoyed a hitch-free Democracy Day celebration.

According to her, the police will not hesitate to prosecute anyone or entity that attempts to cause a breakdown of law and order in the nation’s capital.