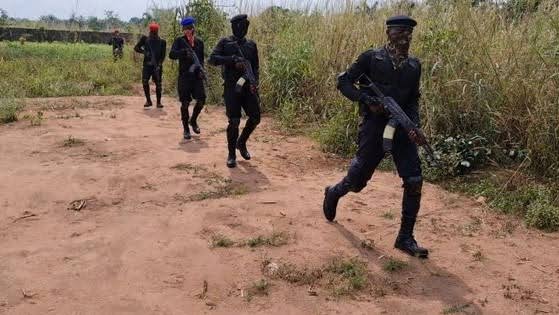 It was gathered that a soldier attached to the 14 Brigade of the Nigerian Army was reportedly shot during the encounter.

Trouble started when ESN stormed the popular Ebem motor park in the Ohafia Local Government Area of the state and begun shooting sporadically.

The shooting was said to have attracted soldiers from the Army Headquarters, in Ohafia, who engaged the suspected ESN members in an exchange of gunfire.

It was gathered that the injured soldier was taken to Federal Medical Center, Umuahia, for treatment.

This forced residents to flee Elu, Amangwu, Ebem and Amaekpu to neighbouring villages to avoid being with stray bullets.

A source told The PUNCH that, “We learnt that some boys believed to be members of the Eastern Security Network came to the popular Ebem motor park and started shooting and later left. Soldiers from 14 Brigade, Ohafia, whose command headquarters is located in the area, later came and went after them.

“We learnt that the unknown gunmen shot a soldier with a double-barrel gun but (he’s) not dead. He’s currently at Federal Medical Center Umuahia, currently receiving medical attention and since that time, there have been sporadic gunshots from all corners.”