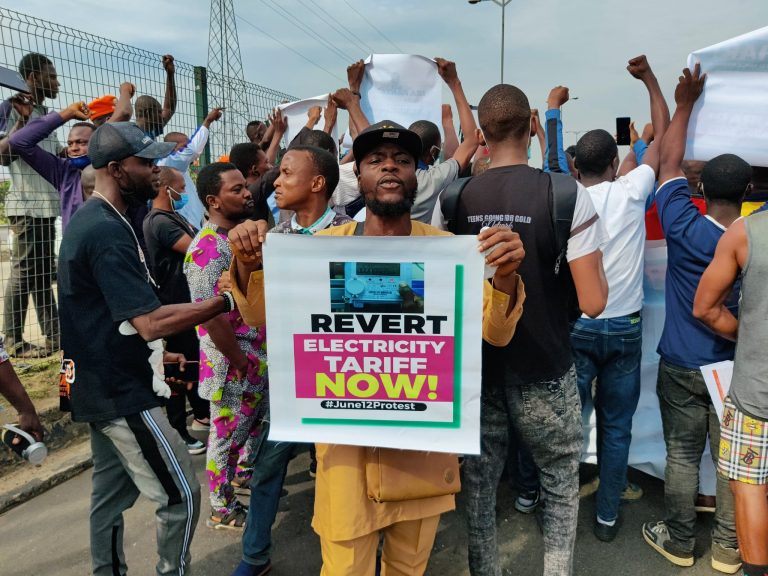 Thousands of Nigerian youths took to the streets on Saturday morning, June 12, 2021, to peacefully protest against the hardship in the country.

June 12, which is now Nigeria’s Democracy Day, is usually set aside to remember and celebrate Chief MKO Abiola.

Join Naija News as we bring you the coverage of the protest in Lagos, Abuja and other major cities…

Operatives of the Lagos State Police Command have fired teargas at peaceful June 12 protesters gathered at the Gani Fawehinmi Park in Ojota on Saturday.

The peaceful protesters were protesting against bad governance and insecurity when the police officers attacked them with tear-gassed and gunshots.

It was gathered that the protesters quickly took to their heels as the fierce-looking officers advanced shooting canisters of tear gas at them.

The police officers, however, arrested some protesters at the venue of the June 12 Democracy Day protest.

Some protesters have converged at the popular Oke-Fai roundabout in Osogbo, the capital of Osun State as the country marked Democracy Day on June 12.

The June 12 protest organised by the Coalition of Civil Society and other civic groups is also taking in Akure, the Ondo State capital.

The youths are protesting against bad governance, insecurity, and economic downturn across the nation.

The protest witnessed quite a big turnout as several people are seen carrying placards and banners with various inscriptions.

Security operatives on Saturday surrounded the Gani Fawehinmi Park in Ojota, Lagos, where Nigerian youths had planned to stage the June 12 protest.

It was gathered that three Hilux Vehicles and two armored tanks were spotted at the scene.

A further report had it that security operatives hindered three people from accessing the park.

At the scene of the protest was an armored tank and five Hilux Vehicles patrolled the area.

The Lagos State Police Command had earlier stated it is unaware of any planned protests by any group/groups on June 12 Democracy Day.