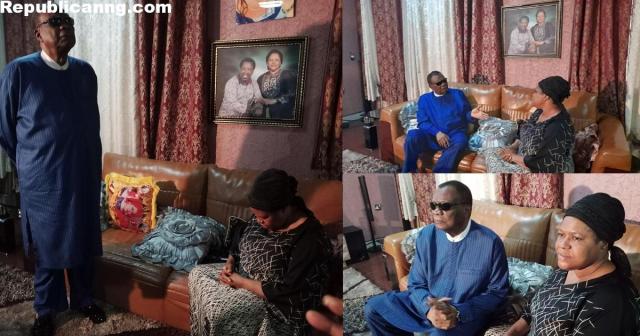 The founder of Christ Apostolic Church, Agbala Itura, Prophet Samuel Kayode Abiara, on Thursday, visited the wife of the late founder of the Synagogue Church of All Nations, Prophet T B Joshua.

Recall that SCOAN on Sunday morning confirmed the death of its leader which has attracted reactions across the world.

The televangelist died on June 5, a few days to his 58th birthday.

Following the death of the cleric, some person has condemned men of God in the country for failing to send their condolence to the family of the late cleric.

Meanwhile, the Christian Association of Nigeria, on Tuesday finally expressed sadness over the death of Prophet T B Joshua.

The association released this following condemnation of its silence over the death of the cleric.

The President of CAN, Dr Samson Olasupo Ayokunle, in a statement titled: “Letter of condolence on the demise of Prophet T.B. Joshua”, described him as “one of the foremost Nigerian charismatic pastor, televangelist, and philanthropist who devoted his entire life to the propagation of the gospel.”

Prophet Abiara has joined the league of clerics who has reached out to the family of the prophet to express their condolence.